The Revolutionary Army Of The Infant Jesus: Audio visual revolutionaries

Peter Small spoke to the band who shroud themselves in anonymity, THE REVOLUTIONARY ARMY OF THE INFANT JESUS 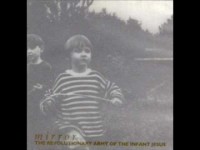 The scene is set. Sheets hang down obscuring much of the stage. Behind, rows of candles glow and at each side a stack of television sets show a slow-moving hypnotic succession of images. Yep, it's another Revolutionary Army Of The Infant Jesus gig, probably different to anything else you've ever experienced, including, for that matter, previous RAIJ gigs. They first appeared back in '87 with an astonishing album 'The Gift Of Tears', released on Liverpool indie label Probe Plus, mainly known for Peel faves Half Man Half Biscuit. Tracks were played on nighttime radio 1 and Melody Maker described it as "haunting, attractive, harrowing and irritating ". Clearly this ain't what they call rock'n' roll. The blatant use of biblical and liturgical words, music and images without apparent irony as well as appearances at Christian festivals suggest that Liverpool is once again home to some mighty interesting happenings. I talked to Jon Egan, Bronek Kram and Les Hampson on the eve of their new release 'Mirror'.

The Revolutionary Army Of The Infant Jesus are unique. As far as I can see the only real precedent for them is Andy Warhol-period Velvet Underground, the parallels being their audio-visual all-out assault shows, and the songs, a mixture of fragile beauty and relentless rhythm. But if you think they're just another band out to retread the 60s or anything else for that matter, forget it. Not only have their albums missed the baggy/acid boom by a year on each side, they immediately strike me as about as susceptible to the vagaries of fashion as your grandma; far more interested in exploring Russian Orthodox theology of art as sacrament than pumping up anybody's jam. Attempts to categorise typically result in unending lists like 'avant-garde-celtic- gypsy-industrial-disco-etc'. They use synthesisers, Gregorian-type chants, voice and sound samples as well as acoustic guitar, flute, sax, melodica and lots of percussion. The effect is less House, more Gothic Cathedral but they do share one thing with Michael Jackson which is that it's been four years since the last album. Why so long?

"Various problems and mishaps," says Bronek. Jon continues, "It took about three years from start to finish." This wasn't helped by having to go through six different engineers: one tragically dying suddenly, another seasoned professional giving up in exasperation at their unorthodox recording methods. So which takes the time, writing or recording? "Finding dates when members can actually attend recording sessions," says Jon. Bronek agrees. "It shouldn't have taken as long as it did. We find the recording process happens very quickly. It's what happens after that which takes the time."

RAIJ albums are multi- layered affairs, the actual music being only a starting point. There's always something going on off-camera, a noise, an echo, a snatch of dialogue. I suggest 'Mirror' sounds more extreme, the accessible parts more so, the less accessible parts much less so.

Jon: "There's only 'Nativity' that's (laughs) unbearably excruciating." The others qualify this to "rather hard work". This features the surprise appearance of an electric guitar. A symptom of line-up change since the first album? "Yes," says Jon, "that was one of the reasons we clasped him (Bronek) to our bosom, his snazzy electric guitar." Not just the trendy East European name and moustache, then. In fact, Bronek has always been involved with the video side of their performances.

I wonder what kind of person listens to this stuff? "We don't actually know," admits Bronek. "We get some strange letters from people." The first run of 'Mirror' CDs was sold out before release, a fact which amazes them. "We should've put a questionnaire in wit hit," remarks Bronek. "Like, 'who are you?'"

With so many strands to their live and studio work I ask where they see themselves primarily coming from - folk, Catholic/Russian Orthodox liturgical music, performance art, rock gospel? "What originally fascinates us about doing an album was making something tangible out of a selection of interests and waiting to see which pigeonhole we ended up in," says Jon. "As it happened, I don't think we did. There were various definitions but none of them really encompassed what we did. But that's because we don't aim to. The finished album is just a by-product, it's not the end to which the work proceeds."

So what is the end? Bronek: "It's the stuff itself. One reason why it took four years to do is that we didn't set out to 'do the second album', we had ideas we wanted to explore."

But what tradition do they see themselves in; after all liturgical art has one function and performance art another. "What's the difference?" says Jon. "One's sacred and one's secular. We're engaged in blurring or breaking down that sort of categorisation." Could this be one of their objectives, artistically? "No," says Jon, "it's that we find ourselves in the process of doing it rather than it being what we set out to do." Bronek takes up the theme. "None of us could really say why and what it is we do. But that doesn't mean to say there's no reason for doing it. But we just don't know what that reason is." Les goes on. "Part of the problem is one of basic perception, whether you see there being a series of categories, and when something fits into it, then you know how to perceive it; but if something doesn't fit into any of the existing categories then you don't know how to talk about it and it means that you can't even consider it. But ironically, if it does fit into a category then you don't consider it anyway because the category itself is the analysis. You have to start looking again at your language of criticism and your language of analysis, maybe, if something is not what you're used to. I'm not saying that's what we set out to do, though."

There are a lot of big words here, often a smokescreen for pretentious drivellers to hide their lack of substance behind. But don't confuse The Revolutionary Army Of The Infant Jesus with the art-pseud weird out "if you don't understand, it must be deep, maan" crowd. Perhaps the key difference is that the band's first step is always a creative, artistic one rather than an intellectual one, but the music speaks for itself.

Not belonging to any tradition, without the rules and guidelines, it must be hard to know when you've got it right. "We have rules but they're based on our intuition, "says Les. "But there are also areas of expertise within the group - Bronek's with film, the impact of successive images, Les's theatrical sources for choreography and theatrical stuff, and we look to liturgical sources to induce the right kind of sensitivity in the audience." Jon remarks that people have in the past accused them of sounding childish and twee but it would be wrong to infer that this is due to a naive approach. A lengthy process of refinement has taken place, "having made mistakes, produced tons of rubbish", through which they have developed "some expertise at creating conditions which produce the right atmosphere for the response we look for," as Jon puts it.

It's true their live performances have in the past been erratic, at worst an inaccessible cacophony accompanied by intriguing visuals; but at best they split the audience into those who quickly leave, uncomprehending and those who stay entranced, caught up in a unique total experience. The albums are a safer bet. While not exactly easy-listening they're a strangely addictive blend of childlike innocence, mystery and threat, though not in the 'slicing up eyeballs ho ho ho' Pixies sense, more that of being in the presence of something vast and other, the Holy Spirit, if you like.

Would they describe what they do as Christian Art? They seem equally reluctant to put themselves in this pigeonhole. "We don't really know what resonance that label has for people," says Jon.

"It's hard," says Bronek. "We don't see anyone doing anything like what we're doing in contemporary music. We draw on sources to create things which are not just collections of other people's work, we create something new out of the sources we use. The way we put together pieces, the way we create whatever it is we manufacture and present, there's nobody else who's doing what we do, as far a s I can see or hear." It's a common enough boast, but one probably justified for once. "Enigma?" suggests Jon. "No," says Bronek, "not at all. There's the difference, if you don't hear it, then I don't know what you're listening to."

And yet most of their songs have biblical sources. "What you call Christianity, what is conspicuous, is there because it's a common language between us," says Jon. "It's the only set of images which enables us to express what we want to creatively. The level of commitment to those images varies from member to member but as a group we use them because it's only the language of the sacred which enables us to express those particular impulses which produce the work. It speaks in a tongue which we're responsive to." Les continues, "Artistically it's very satisfactory, a very productive environment."

We discuss briefly the use of Christian symbols and names in pop: George Michael, Madonna and Bros adorning themselves with crosses, band names like JesusJones, Enigma and the KLF using Gregorian chants. Jon announces a forthcoming Madonna cover version. Bronek suggests that it's nothing more than a marketing ploy. Jon's not so sure. "I don't know but I suspect it's to do with the vacuous nature of modern materialistic society, there's a hunger for something deeper."

It's hard to define why one of their pieces should be more profoundly moving than, say 'Go ahead, punk, eat my bible' Christian rock or indeed, Enigma who make music from similar ingredients; but it is precisely this mysterious dimension which gives their music its depth that they are most interested in capturing.

U2's The Edge recently said that one of the reasons they continued was the lack within contemporary music of anything with an authentic spiritual dimension. On that score alone the RAIJ could be one of our most important and undervalued groups.

The opinions expressed in this article are not necessarily those held by Cross Rhythms. Any expressed views were accurate at the time of publishing but may or may not reflect the views of the individuals concerned at a later date.
About Peter Small
Peter Small is the journalistic pseudonym of musician Tim Thwaites.

I read there`s a box cd set available in 2013. Its on one of RAIJ videos on Youtube. Our Gothic Moon Records is worth cheching.

see them live in June in Liverpool

Correct, it will be out in may, hopefully. There will be some new material which was recorded mid-winter.

I can't remember when I heard about them but theirs hardly anything about them online, I read somewhere that two of the were uni professors up in liverpool. They must be around somewhere but perhaps they just loved the anonymity. Managed to grab one of their CD's off ebay last year. Thats the only tangible thing I've seen to prove they even existed!

Where are they now? I love their haunting soundscapes but never got the chance to see them live. I guess they were of their time and when their gone their gone. But I'd like to discover a contemporary christian band that produces such unusual and evocative music.