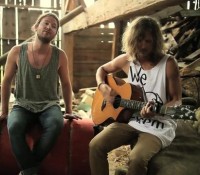 The new album by Canada's The Royal Royal shows that once again Seattle's BEC Recordings/Tooth & Nail have an uncanny knack of locating artists with genuine national and international potential among the tens of thousands of independent artists pitching for recognition in the vast iTunes expanses. The Royal Royal's album 'Rococo' has already produced a Cross Rhythms playlist hit with their infectious "Neon Sign" with another track "God Who Saves" soon to join it on the Cross Rhythms radio airwaves. The Royal Royal are two brothers from Ontario, Nathan and Gabriel 'Gabe' Finochio, who currently serve in ministry in the USA though intriguingly in different cities: Nathan is on staff at Hillsong Church, New York City while Gabe works at Life Church in Allentown, Pennsylvania. Before signing to BEC, the Royal Royal, who got their name from the Pauline teaching of a nation of kings and priests, recorded two EPs and two full-length albums - 'The Royalty', released in 2012 and 'The Return Of The King', released in 2014. Here's what Gabe and I spoke about.

Tony: I understand Dylan Thomas, well known for his work with Hillsong United, worked with you on 'Rococo'.

Gabe: Yes. He brought that general market sound, the sound that we wanted for the album. We are indebted to Dylan. He co-wrote a lot of the songs with us and it was such a pleasure working with him we hope to do it again.

Tony: It's a sophisticated production. I can imagine hundreds of studio hours going into it. Were there?

Gabe: No, actually not. I say that, but there were probably hundreds of studio hours on the backend. The time that I don't see, where the engineer is working away. My brother-in-law, Bryan Voss, engineered the entire album and did a fine job. He probably logged hundreds of hours engineering. The way the album came about, we wrote the whole thing in about six days. We had ideas that we brought to the table but again, I tried to explain this before, but writing with my brother is such a graceful thing. I can really attribute it to the family connection. There's something between us where we just know where we want to go. It's this ying and yang thing where we correct each other's faults. We really do correct each other's faults in a way that if he's writing something crappy, I'll call it out and we'll move on or if I'm doing the same thing, he'll call it out without hesitation. Him being a first born child, he will absolutely tell me I'm wrong. We really do listen to each other. I know that a band like Oasis in the UK, it's more of a sibling rivalry than a band, but if the Gallagher brothers were Christians, they might get along with each other.

Tony: Of all the songs on the album, tell me a couple of favourites?

Gabe: I think my favourite is "Champion". I have sentimental value with "Champion" because we almost threw it away early into development. I really tried to push that song through. I personally never thought "Neon Sign" was any good but my brother championed that one through, and now I really like it. Another song that's come to the forefront that people have constantly responded to that is the song "I Found Love". That's really touched people in ways we were not expecting at all.

Tony: Would you say all those songs are intended for corporate worship or only some of them?

Tony: What are you hoping for the album to achieve? Are there any major tours coming up? 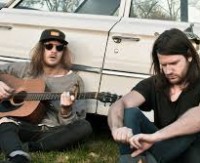 Gabe: Yeah, we definitely want to hit the road with the album, there's no question about it. Our schedules have to allow for that. We do have another life in local churches. We love the local church. We also have different positions outside of music at the churches. There's no doubt we want to do whatever it takes to support the album. We're definitely planning some tours and trying to promote it as much as possible.

Tony: When you sing songs in your local church setting, are you largely singing your own or are you singing Hillsong's latest or Matt Redmond's latest?

Gabe: At our local churches, we're singing whatever they tell us to sing. We don't have a choice in the matter really. Most of my favourite worship music isn't my music at all. Definitely, yeah like Matt Redmond and Tim Hughes. There are so many great UK worship writers. Hillsong too.

Tony: Would you say you've been influenced by the British modern worship movement?

Gabe: Absolutely. I remember as a kid, one of the first worship albums I had was by Delirious? 'Live And In The Can'. I was a little late getting 'Cutting Edge', I got it when I was 10 or 11. I got 'Cutting Edge' and that album cut me open. I haven't recovered since. I got that whole album and I remember hearing about a guy called Matt Redman and I said, "Wow, this is incredible," so I've been watching his career over the years. I've been heavily influenced. I think "Lord You Have My Heart" is my favourite worship song of all time.

Tony: You did two previous albums. Had you found your voice on those albums?

Gabe: I think those albums were definitely stepping stones for where we are now. I like them - I don't hate them - but we were still experimenting. You can even see this in a band like Delirious?: their first few albums, they're still experimenting. Artists are trying to get all of the art in them out of them. A good artist tries to die with all of his art outside of him, and his life is just an attempt to pour out what's inside of him. As that happens, you want to experiment. The nature of art is constantly trying to refreshen what has sometimes grown old. We continue, not necessarily to discover new things, but to take old things and refresh them. Our art grows: it's progressive. So I don't look with disdain on the old albums. I appreciate those two other albums for where we were at, what we were doing. Are they representative of where we're at now? No. I think we've grown. When I listened to 'OK Computer', I got blown away; then I heard 'Kid A', and I detested it - I was like, 'What is this garbage?' But I began to love it. Radiohead had this thing for years where they would push themselves, they would grow where they wanted to take their art. I think we're the same sort of way. I don't think we're going to go weird, but I think we're trying to push ourselves.

Tony: Music fans of the more hipster inclination will criticise worship music for its simplicity, but to be congregational you have to be simple. Still, I think that on the 'Rococo' album you've managed to be both creative and worshipful.

Gabe: That's a high compliment, and I appreciate it very much. I guess the only explanation is that we just won't compromise on certain things. We love good music, so Nathan and I are our own worst critics. If the sound isn't right - music, not lyric - we're not even going to indulge in writing lyric. We write music first because we want that emotive quality. The bewitching part of song is music: it's the thing you hear before anything else, and it's the thing you respond to. 'I love that beat', 'I love that hook'. We want the music to be as good as it could be, for us; then we'll begin to write lyric around music. The lyric we also want to be quality, but we understand, as you said, corporate worship has to be simpler; so sometimes we're like, 'You know what? This song is not going to be a corporate worship song.' We're totally cool with that. We want it to be all in the context of exalting the Lord, focusing on the Lord. The Royal Royal will never become a performance band. There's nothing wrong with performance bands, even in the Christian music industry, but that's not where we're at: the Royal Royal is a tithe to the Lord.

Nathan and I are artists. There are songs we've written for girls, there are songs we've written about the sun, moon and stars - nature, there are songs that are lamentations about society and culture. A bigger project for us is to write songs in protest of things going on that probably would fit in the general music industry, but the point is simply that we are artists and we can write songs about anything. We do: Nathan has a whole catalogue about other things. But The Royal Royal is a tithe, giving the Lord my first fruits as a representation that the Lord has given me all my fruits. 'I'm giving you 10 per cent, but you own 100 per cent; and this is just a token of my appreciation and a recognition that all of it belongs to you.' All of our talent, as artists, belongs to the Lord; but The Royal Royal is that small percentage of music that we give to the Lord. We will not take that tithe and go to the casino with it. If we ever become a performance band, that might be the case, so we want to stay far away from that.