The Ruins: The alternative pop duo from Atlanta, now signed to Dream Records 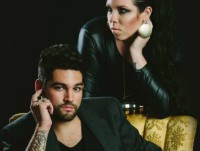 In 2016 two singer/songwriters, Debra Black and Victor Gonzalez, began to make music together under the name The Ruins and over the following 18 months released three singles, "Deliverance", "Bow Down" and "Run". But now the alternative pop duo have achieved what thousands of independent artists dream of, being signed to a major record label. Said the Dream Label Group's Lance Brown, "At Dream we love connecting with artists all the time but what especially drives us is hearing their hearts and calling with the arts. When I met both Debra and Victor, I knew right away I wanted to work with them. The Ruins are a great group that we feel God will use for his great purpose and we are excited to be on this musical journey with them."

Debra Black was raised in the country suburbs of Atlanta, Georgia. In 2012 she released a single, "More Than Enough"; two years later a worship album, 'God In Every Season'; and in 2015, two more singles, "Bright" and "Wildflowers". But it was her meeting Florida-raised experienced Christian communicator Victor Gonzalez which took the couple in a new musical direction.

Victor and Debra first met when Debra was serving as a worship leader at her church. Said Debra, "I had released a worship album a year and a half ago and had led worship in the church for years, but I kept feeling a tug in my heart to expand my musical passions beyond worship. I wanted to sing what I love to hear. It was a really big and difficult decision, but it was crazy how God reached down and gave me little nudges from Heaven. I heard a message on fear and then my mom called and shared a devotional about what fear does to you and I realised I had been hesitating going the pop route because it was unknown to me. I knew worship. Worship is safe for me. But God was calling me to do new things."

As it turned out, Victor was feeling a similar call to take a more adventurous approach to music. The group name that he and Debra decided upon, though, was an unusual one. He remembered, "During my missions trip, at one point we went to see these ancient ruins. We climbed to the top of this precipice and could see them for miles in every direction. I was so struck that people were flocking to these broken down, decaying remains, seeing them as beautiful. At one point, the buildings were created for a specific purpose, but over time had been destroyed. Now, while they are crumbling and dying, they represent something beautiful and appealing. It opened my eyes to the reality of God in my own life in a way unlike I had experienced before. I have tons of issues and baggage, but God looks down on me and doesn't see ugliness. He doesn't see something ruined. He sees something - someone - redeemed."

When The Ruins released the "Run" single Victor said, "I think people are always scared to take a leap of faith and trust something they can't see, but the message that you find in 'Run' brings a picture of reality to mind that sometimes it's better to head toward a hope you can't see rather than being stuck where you feel like you're just taking blow after blow. I hope this song encourages people to take more leaps of faith in their life."

Now "Run" and the group's other two singles will be released by Dream on an EP on 1st February 2019. It looks like it's going to be an exciting ride for both band and label. Said The Ruins, "We feel honoured and blessed to be able to join a team that believes in us and has the same desire we do to share our music and hope with the world."

For more on The Ruins visit the The Ruins artist profile