The Singing Contractors: From working on houses to viral mega hits

Josh: "I don't think I had one of those, but our paths crossed when we were teenagers. We weren't friends, but we were acquaintances: I knew who he was, he knew who I was. My dad was a song evangelist as well, and he dragged us kids around the country in an Airstream and a Chrysler woodgrain station wagon. They just brought us everywhere. My dad made two recordings, but they were 8-tracks and records. He was Mark Arnett and he's my hero. He's got a tremendous voice."

Tony: How would you describe your music?

Josh: "Aaron and I don't class ourselves as Southern gospel. We put ourselves in a kind of country-gospel sound because our music sounds different and we're trying to reach a broader audience." 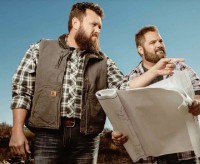 Tony: What in your mind would be a classic 'country-gospel' group?

Tony: Don't you need a bit of musical accompaniment when you're country gospel as opposed to Southern gospel?

Josh: "Acoustic guitar and upright bass. The thing with us is we're given incredible opportunities where we can reach out to several different genres. We don't want to classify ourselves in any area. We want to be able to go anywhere and uplift the name of Jesus."

Tony: How did the "How Great Thou Art" video come about?

Josh: "We made several videos, but the one that went viral we were on a full basement remodel, and then we did some upstairs kitchen remodelling too. Aaron was on the job, I was on the job. I believe he was downstairs, I was upstairs - we were doing different things - and he comes running to me towards the end of the day, he says, 'Hey, Josh, we got another request.' I said, 'Oh yeah? That's cool.' He goes, 'We got another request to sing "How Great Thou Art".' I go, 'All right, so let's do it!' We literally dropped the toolbelts and we sang in the basement of this house which was located around the Indianapolis area, fairly close to where we live. We sang 'How Great Thou Art', we posted the video like four o'clock that evening, four-thirty, and within 32 hours it had over a million views."

Tony: Did the phone ring after that?

Josh: "It did. Actually, the song now has almost 16 million views. The phone started ringing, the emails started flowing, and before you knew it, three or four days later, we were on a plane to New York City and we were able to sing 'How Great Thou Art' live on Fox & Friends. From that moment, things started growing for us. We were able to sing another song, 'Mary, Did You Know?', and that has over 70 million views online. It's incredible the opportunities God has opened for us."

Tony: Have you done your favourite songs on this album?

Aaron: "We pick songs that speak to us personally, and songs that will speak to the average guy on the job - songs that encourage us, and we hope they encourage others. That's how we pick them."