Tony Cummings reports on Elissa and Becca Leander, otherwise known as THE SONFLOWERZ 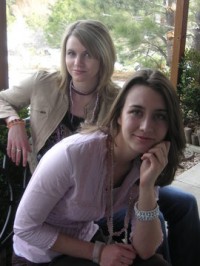 It's a strange quirk of the music industry that an album by an American duo, issued in the UK in May, should only have received its US release in December. But then The Sonflowerz, two Colorado-based sisters Elissa Leander (25) and Becca Leander (23), have ministered in Britain on numerous occasions, playing various festivals. Now that the pair have finally got a record company behind them big things are being predicted for the Leander sisters and their 'All Over The World' album. Wrote Christian Retailing magazine, "The girls sing radio-friendly pop that sounds a bit like Point Of Grace, meaning their album will appeal to adult contemporary fans. But it should also attract younger audiences, in part because of age, but also because some of their songs, especially the title track, have a bit of a Hillsong vibe."

Certainly things are looking up for the group Stateside. The "All Over The World" title track was featured as the theme song of a new ABC Family TV series, One Good Turn With Joey T. Also, the first single from the album, "Edge Of My Seat", won a $5,000 Grand Prize on OurStage.com for November for the Christian/Spiritual genre and received more votes than any other song in all 56 genres competing for the prize. Elissa, the lead singer of The Sonflowerz, commented, "When we received the news this December, we were completely astounded at God's goodness and the impact this song is having."

The Sonflowerz began in 1997 when Elissa Leander began writing original worship songs at the age of 14. Music was always around the Leander home. Becca recounted, "Growing up I took piano lessons, which I didn't like at the time. When I decided to learn guitar, it was my dad who showed me the first steps. I taught myself from there. Now I wish I had paid more attention during piano lessons because I love playing the piano!" So did she always harbour dreams of doing music full time? "For me, there wasn't an exact moment [in thinking about that]. It's been a growing process of learning to trust God each step of the way. His will became more and more clear as we were obedient with the small things. Playing music is something we love doing. It's part of who we are and what God has put on our hearts to do."

Encouraged by her youth pastor to form a group, The Sonflowerz emerged. Originally calling their style "acoustic rock with an alternative flavour," The Sonflowerz consisted of Elissa Leander (guitar/ lead vocals), Becca Leander (bass/ bvs), Joy Caden (lead guitar/bvs), Shara Houlihan (drums) and Jessie Gingrich (keyboards/ bvs). They recorded their first album, 'You Remain', independently in 2002 and a second, by which time they were a three-piece, 'Alive In You' in 2005. But it was teaming up with six-time Dove Award-winning producer Don Koch for 'All Over The World' which finally took The Sonflowerz to a national release. Said Koch, "When I first met The Sonflowerz, I was taken back by how transparent their hearts are. I could easily see Christ in them. Their passion for family, for ministry and their love for singing came shining through." 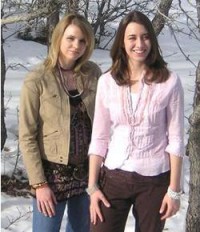 Their album, released in the UK by Integrity-Provident in May 2008, was picked up by America's Avista Records. Becca told website stereotruth.net, "Avista Records are an indie label who are working with us to distribute our new album. It's the best of both worlds: major label distribution yet we are still independent in many ways."

With an American lay preacher father and a British mother, the group consider themselves half British. Becca said that one of her main ambitions was to meet Paul McCartney. "The Beatles have been a huge influence, especially because we're half British. Paul has a huge talent for songwriting and he seems really authentic and down-to-earth. Also, I admire him as a bass player."

Now The Sonflowerz are busy touring, promoting 'All Over The World'. Said Becca, "Several times a month we travel, either by van or plane. This month we are in Iowa, then we have a few weeks off. This fall we'll be travelling a lot. Recently we drove into a small town in Wyoming after a long drive. It was midnight. As we drove through the empty town there on the bank sign it said "WELCOME SONFLOWERZ". We felt like we had just come home!"

When asked what God had shown them in the last few weeks, Becca responded, "How important it is to stay humble in my heart before God. And realising that anything good that happens is only by his grace."