The latest part of the ongoing series chronicling, in no particular order, the greatest 1001 recordings made by Christian artists

977. GRAHAM KENDRICK - KNOWING YOU JESUS, 2010. From the album 'The Very Best Of Graham Kendrick: Knowing You Jesus', Kingsway Music.
Graham is unquestionably the founding father of Britain's modern worship movement. He wrote his haunting "Knowing You Jesus" in 1993 but it was Graham's later recording of his classic song, with fine production from Nathan Nockels, which best brings out its beauty.
Tony Cummings 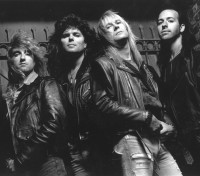 978. BLOODGOOD - BATTLE OF THE FLESH, 1987. From the album 'Detonation', Frontline.
California's Bloodgood were pioneers of Christian heavy metal and The Encyclopedia Of Christian Music has since called their second album 'Detonation' a "legitimate masterpiece". "Battle of The Flesh" is a fast and furious affair with Les Carlson's shrieked vocals and David Zaffiro's frantic guitar making for an exhilarating attack on the enemy that lurks within.
Tony Cummings

979. GOLDEN GATE JUBILEE QUARTET - GOD TOLD NICODEMUS, 1941. From the album 'Complete Recorded Works In Chronological Order Vol 4 1939-1943', Document.
In the years of the 2nd World War the Gates were at the top of their game. Recording regularly, broadcasting on CBS and playing nightclubs where they sang a mixture of gospel and mainstream material they were as much admired as the Ink Spots and the Mills Brothers and paved the way for all the black vocal groups who first with doowop, then with soul, were to go on to success in the '50s and '60s. I don't know whether they ever performed "God Told Nicodemus" in the nightclubs - the recording remained unissued for decades - but maybe its uncompromising "you must be born again" message was felt a bit too challenging for nightclub sophisticates, but it's still an acappella gem of syncopated rhythm.
Tony Cummings

980. AMY GRANT - WISE UP, 1985. From the album 'Unguarded', Myrrh.
Amy took CCM to unprecedented sales heights in the '80s before becoming a bona fide pop star and then as her career trajectory began to dip embraced a more country-influenced sound. The one thing Amy seldom touched on though was music that could even remotely be described as "funky". But it was a strong dash of R&B that made "Wise Up" - written by Wayne Kirkpatrick and Billy Simon - such an arresting track with a nod going to the rasping bvs of sessioner Tommy Funderburk.
Tony Cummings

again thank you Tony for your efforts greatly appreciated, mind you l go back to the tour of the top twenty at GB 84

The song "See What You Done, Done" by Delia Gartrell has been in my head since the day I first heard it on the radio in Atlanta back in 1973 (it's 2015 now). Never knew who the artist was, but now I know Delia Gartrell. Thanks for sharing. This song, for me, still packs a punch with its guitar and lyrics. Love it.

Thank you for your comment! Delia Gartrell is very happy to know that you Have enjoyed her music for so long. Our Family Thanks You😎 vj

So, if 809. All The Poor & Powerless is 'ASAD's finest achievement so far', why is it ranked lower than 773. I Am Set Free from the exact same album?

Your listing is quite interesting, but seems to represent personal favorites more often than significant contributions to Christian music. Plus, having started the list in 1990, it's high time for a massive revision (19 of your top 25 are from the 1980s).

Interesting selection :)
Good thing I wasn't tasked with doing this - I think I'd have filled at least 100 of the places with Jon Foreman tracks, with/without Switchfoot!! :/ I mean - Dare You To Move? God Badge? Cure For The Pain?
Still, you've come up with a great mix :)

Thanks for the piece on my favorite gospel quartet of all times, Jet Bledsoe and the Spirit of Memphis Quartet. They were brilliant and I never heard better harmonizing from a group. In my opinion, Jet Bledsoe was one of the Kings of Gospel, even thought I have never found him listed as such. He had a voice that was unmatched by anyone I've heard. I listen to their music (have several albums) often and they still wreck my house.

As producer of the wonderful CD, DEEPER STILL, I will never forget the first time I heard the cover tune, Deeper Still. There is a very deep water hole here! Give it a listen!

I'm following this for years and I found a lot of great music with the help of Crossrhythms. Its great that you include old Gospel as well as rare Jesus Music.

I like Bands like Phoenix Sunshine and Azitis a lot and also the Swan Silvertones and I remember that I listened a lot to the Mighty Clouds of Joy when I had a hard time in my life some years ago. I also like the song nr 463 from Chris Taylor. (Even if I'm quiet sure the man on the photo is the wrong Chris Taylor. There are two Chris Taylors within the christian musicscene)

I remember that a long long time ago when Cross Rythms was a magazine that you could buy in your local christian bookshop, that in one magazine you did include a top ten of the alltime favourite albums of Tony Cummings and Mike Rimmer and other writers and reades. Maybe you could do this again. I think it would be very interesting.

THE MOST AMAZING BOOK I HAVE EVER READ!
MOST UPLIFTING AND EDUCATIONAL TO ME.
I GREW UP KNOWING BR. CLAUSE PERSONALLY AND REMEMBER HIM WELL. I ADMIRE THE LIVE HE LIVED AND PLEASING UNTO THE GOD HE BELIEVED IN. I TOO, BELIEVE IN THE SAME GOD, AND HAVE THAT PERSONAL RELATIONSHIP AS BRO. CLAUDE HAD.
THIS BOOK HAS MADE ME REALIZE THAT WHICH I DID NOT CONCERNING THE PENTECOSTAL/HOLINESS MOVEMENT I GREW UP IN. IT HAS ANSWERED MANY QUESTIONS EVEN THE ONES I NEVER REALLY KNEW I HAD UNTIL I READ THE TRUTH AND BACKGROUND IN THIS MOST INFORMATIVE, WELL RESEARCHED AND INSPIRING BOOK I HAVE EVER PUT MY HANDS ON AND HAVE READ WITH SUCH PASSION.
THANK YOU SO MUCH BRO. MACEL ELY II, FOR YOUR DEDICATION AND HARD WORK TO GIVE THIS GIFT TO US.
GOD BLESS YOU AND KEEP YOU UNTIL YOUR NEXT COMPLETED PROJECT. THANK YOU.

I love Brother Claude Ely's music!!! I just bought the biography book and music CD about his life and ministry at www.aintnograve.com

It was one of the best books I've ever read in my life!