The Strange Familiar: From The Vampire Diaries to the miracle of child birth

One of the ways that a group or soloist can rise above the pack in the crowded mainstream music world is to get exposure on an internationally popular TV series or two. That is just what has happened to the Ohio-based pop rock band The Strange Familiar. The group's songs have been featured in such TV hits as The Vampire Diaries and Pretty Little Liars. Krian Music Group recently released The Strange Familiar's fourth album 'The Day The Light Went Out' and like its three predecessors it's received favourable reviews from the critics. Only a few of those critics, though, have noted that ever since their first release in 2008 many of their songs, written by husband and wife team Jeff and Kira Andrea, reflect a strong Christian faith. Cross Rhythms had a recent opportunity to speak to singer and pianist Kira about their Catholic spirituality and their eight years in music.

Said Kira, "Our faith has always been a part of what we do - but we never put it out there: 'Hey, we're a Christian band!' I think now we've had a child, that makes us want to put this more at the forefront of what we're doing. To be able to talk about it is really refreshing. I do worry about The Strange Familiar being given the 'Christian band' label, but not too much. I think you've got to be true to who you are. It comes out in everything that we do: it's such a big part of our lives. The way we write is a little bit more universal, and anyone can take something away from it - a positive message, no matter what."

Kira Leyden and Jeff Andrea first met in grammar school in Cuyahoga Falls, Ohio. Recalled Kira, "I was in seventh grade when I saw Jeff's band playing Pearl Jam's 'Yellow Ledbetter' at our school dance. The singer forgot the words and walked off the stage and I remember thinking, 'I could do better than that!'." The couple began to sing together and by the time they were in high school Kira and Jeff were in a group called Jaded Era. They both grew up in a church called Immaculate Heart Of Mary, which they still attend. After Jaded Era disbanded, Kira and Jeff headed to the Leyden family basement where they set up a studio and started writing songs that would become the foundation of The Strange Familiar. After months of performing around town and experimenting with new sounds, they recruited bass player Frank Freeman, who had also parted ways with his band. The three of them made a bold move to Los Angeles. As it turned out, their driver, drummer Nicholas Sainato, asked if he could audition to join the band. And so The Strange Familiar became a four piece.

In LA doors began opening for them. A meeting with producer Brian Malouf (Pearl Jam, Michael Jackson) led to the group recording their first EP, 'You Can't Go Back', in 2008 and the following year a full length album, 'This Is Gravity', was issued on the group's own label Paper Doll Records. The first single from that project, "Courage Is", was heavily promoted on ABC Family to launch a new series, The Secret Life Of The American Teenager. Without a label the song reached the iTunes top 10.

In 2012 the band signed a record deal with indie label Krian Music Group and released their first nationally distributed full length album, 'Chasing Shadows'. TV again played a key part in popularising the album and their song "Redemption" was used in promos and trailers for Switched At Birth while their single "Unwanted" was featured in a season three episode of Pretty Little Liars. Kira summarised the effect of The Strange Familiar's TV exposure. "It definitely gave us more fans. I think so many people found out about us because of these shows. It's crazy how many people found our songs, found all our videos on YouTube. It changed a lot for us. It meant more sales, more downloads, more people following the band. We haven't been a super-extensive touring band, but we hope to play more. Jeff and I had our first child last May, making the touring thing a little harder."

On 15th April 2014 the group's 'The Day The Light Went Out' was released. The first single from the project was "Rain". On its release Kira said, "This single is very special as it documents my thought process during our first pregnancy. Initially it was meant to be a lullaby, but it turned out to be something totally different." Reflecting the hopes and fears of being a parent for the first time and those fears being conquered by faith, the track is a gem in a powerful album. Speaking about her pregnancy Kira said, "We were very torn by the push and pull of what it means to bring a child into the world. We prayed constantly that we would make the right decisions for our child. We hope this song will resonate with parents, however we believe that you don't have to be a parent to relate. If you have parents or grandparents that raised you in a loving way - sacrificing and doing all they could to give you the best life possible - that is the healing 'rain' that is showered on one's life. We hope this will strike a chord."

The song had so much of an impact on the couple's life that they named their now 14-month-old baby girl Rayne. "She was such a miracle because at birth I had complications that required surgery that landed me in intensive care. It was the scariest time in my life. The song came flooding back and quickly became a testimony of our faith!" exclaimed Kira. The essence of the song took on a new meaning when the Andrea's realised that the 'rain' of faith in their lives was God bringing them through a time of suffering, and when they came out on the other side they were braver, tougher and more selfless than they were before. Said Kira, "We will always share this story with Rayne and show her that she is a walking, breathing answer to prayer and a true test of faith. We pray that this sets a strong foundation in our faith in Christ for our daughter to take with her to face the world."

An equally fine track on 'The Day The Light Went Out' is the title song. Explained Kira, "It's all about suffering and the crucifixion of Jesus, what he did for love. You can't put that light out." 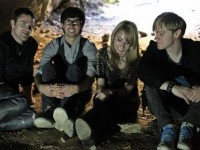 Returning to the subject of parenting Kira commented, "I think motherhood makes you look at everything totally differently. It's like, all of sudden, the things you used to think were important aren't as important anymore; the things that really matter become more apparent. You think, 'What can I do as a parent?' That's what we did in our song "Rain": we were thinking about all the fears and worries - but also all the joys that parenthood brings. To bring a new life into the world is such a miracle, such a blessing, you realise how precious life really is."