The Vocal Few: The husband and wife duo from Seattle 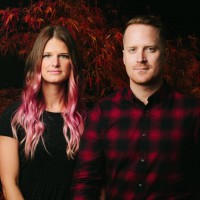 Anyone listening to the engaging folk pop of "The Dream Alive" by the Vocal Few might recognise the voice of Matt MacDonald. For it is Matt, together with his wife Kristie, who make up the duo the Vocal Few. Matt is no stranger to the Cross Rhythms playlists, the Seattle-based rock band which he fronts, The Classic Crime, having long been CR radio favourites, stretching back to 2006's "The Coldest Heart", 2013's "What I'd Give Up" and several tracks from their retrospective 'What Was Done Vol 1: A Decade Revisited'. The Vocal Few began as a "pre-baby bucket list" project before the birth of their first daughter, Praise. Their first EP 'She'll Be Right' was released in January 2012, one month after Praise was born. The duo's second EP 'Tall Trees' was released in May 2013 shortly after the couple discovered that Kristie was pregnant with their second daughter, Piper. Although Matt admitted that the Vocal Few were started to raise some "diaper money" he also admits that "it was probably going to happen either way because Kristie really wanted it to happen."

Such has been the popularity of the Vocal Few that the duo are now considering the possibility of purchasing an RV and touring the United States. "Be a real family band," as Matt puts it. When asked by Mike Sweckerhe where he sees this project going, Matt replied, "I let Kristie do all the planning, she's the forward thinker." Matt is more of a one-project-at-a-time man, and it is working for him. "If you look too far down the road you can't really imagine it. Like I can't really picture myself being 48 and playing in peoples' living rooms and people still caring. I'm not ruling that out as an option, but it's hard for me to see. I just take it as the opportunities come and hopefully one thing leads to another. That's what I've learned, is that you have to do some hard work, and then more hard work, and then hopefully that will open the door up for some more hard work. . .we're just preparing to continue making music and see where that leads us."

The project name Vocal Few was settled on for layers upon layers of meanings. Both band members sing the vocals, there are only two in the band, which qualifies as a few. Also, in society the vocal few can change culture, because they're vocal, active participants in the social discourse. In other words, the squeaky wheel gets the grease, and Matt and Kristie want their songs to squeak, loudly, until everybody hears their music.

The duo's latest EP 'The Dream Alive' has, like its predecessors, received enthusiastic reviews. Wrote Jesus Freak Hideout, "Matt and Kristie MacDonald take an even more bare bones approach with Matt playing acoustic guitar and Kristie on keys, only accented with small doses of cello, handclaps, and percussion shakers. While this simplistic instrumentation is an attractive element of the duo's sound, it's their vocals that draw you in with Matt's veiled majestic singing complemented by Kristie's beautiful, relaxing voice."

Clearly, more music will follow, even if no more diapers are needed.