The Winans Phase 2: A third generation of Winans determined to make their mark. 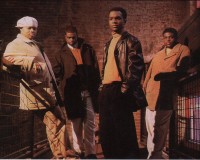 In Nashville there's a famous theatre called The Ryman. I have a microphone; I'm walking down the street doing a recorded piece for my radio show. It's not every day you can report from the streets of the city, which is home to CCM so I'm enjoying myself. Outside the theatre where a showcase is taking place I encounter a rock band and I'm interviewing them when suddenly there's a bustle behind me and the sound of black voices shouting, "Mike Rimmer! Mike Rimmer! He's da man!"

I turn around as the four members of The Winans Phase 2 scurry past grinning and their minder/father/uncle Carvin Winans also passes giving me a winning smile. His boys are happy, they've just been duetting with Amy Grant. For me it's another bizarre moment in Music City but for them it's all part of a special year for this is their year to launch their music ministry. To do it they've released what is reputed to be the most expensive Christian music debut ever recorded, 'We Got Next'.

Mind you, considering the pedigree that comes from being the sons of the original Winans, there's plenty of belief that these teenagers have the musical chops and the spiritual maturity to reach their generation just like their fathers. Earlier in the day I'd met up for a chat with the guys and thought that they would have been trained from infancy for this moment but found it wasn't true. Michael Jnr explained, "Irrespective of this legacy, we were not going to sing." He laughed, "We were playing basketball with our High Schools, playing tennis, doing plays and acting but then God brought everything together. We just really thank God he's put together the puzzle."

They're certainly not afraid of being compared to the previous generations of Winans. One song on the new album, "I'm A Winans Too" is a bit of a theme song. Marvin Jnr commented, "It basically breaks down our family history as far as who's singing, where we come from, who's our dad, our aunt, etc. It just tells what we're all about."

Gathered together in their hotel suite, I suggested that there must be some pressure when they consider how many millions of albums their parents, uncles and aunts have sold in the past decade. Surely it's impossible to escape from the shadow of that? They were honest in their response. Juan explained, "It's always been a challenge to live up to family legacy, especially as we are so close and so competitive. I don't think it's as big a challenge as people might see." Marvin Jnr continued, "It's a responsibility that we have to make our standards high, but we have to live, whether it be for our family or for someone else, we have to live for ourselves. The responsibility is really on us doing the work for him (God)." Carvin Jnr added, "We want to do bigger things, even than our parents have done. They've set the path, they've made the way for us. It wouldn't do them justice to take this and go backward and just stay here. We're gonna take what they've set up for us and blow it up."

Looking at the career path of the Winans brothers, it's an ambitious plan to be even more successful than one of the all time most popular groups in gospel music history. So is it the innocence of youth or the confidence in the giftings of a creative God that made Carvin Jnr declare, "We wanna go even bigger and further - we talk about that all the time. It's reaching the people that they didn't reach and even more people than they've reached. Doing more things, accomplishing more goals."

Perhaps it's the fact that they've now recorded one of the hottest debut R&B albums I've ever heard. 'We Got Next' is a project that goes beyond the hype and promises to establish the guys as a group to set the pace in the next century. As for making the recording, Michael confessed, "It was a lot of fun. Basically we had a standard. Every time we would start in the studio we would pray for God's anointing on what we did. We had a lot of different producers and a lot of different experiences." Marvin Jnr chipped in, "A lot of fun, a lot of hard work. It made us work but basically a whole lot of fun."

But it wasn't all fun! As the conversation buzzed around between group members and they shared some of their collective memories of the fun times, Carvin Jnr got serious and explained, "I think the difference this time is we used to see our parents working in the studios but we didn't really see just how much work they had to put into it. As kids we really didn't experience that first hand. When we got into the studio to do our stuff, we knew there would be work but when we were actually finished with the product we didn't think it would be that much work!" He chuckled and then continued, "We really learnt from that and we now know first hand how much work is involved just to get one song completed."

So having recorded their debut album did it change the way they view what their parents have achieved? Marvin responded, "It changed our respect for our parents. Our parents have nine albums now and we are just getting finished with one. That just lifts up the standard and the respect level. We also thank God that we were raised in the fear of God and in holiness and in the church where we were raised. We just thank all the Elders who came before us and spoke because they have really shared a lot of wisdom and that's kept us on the right path."

In talking with the band, it was clear that whether they had chosen to make music or follow other pursuits, they would have lived with the same conviction that they wanted to communicate Christ to their generation. Michael Jnr agreed, "If we had remained playing basketball or tennis and not on a stage we'd be on the playground talking about God."

The spiritual experiences of the band have influenced their sense of mission. Yes, they were raised in the church but each group member has embraced faith in Christ and now they want to tell others. Marvin Jnr shared, "Once you've experienced the life changing effect of Jesus Christ and you accept him, it kind of gives you a motive to want to live right. To be an example so the people can experience what you've experienced. We want everyone out there to live for God and fear God and trust in God because once you're doing this, there's no turning back. It's the life to live. There's no better life out there."

So to the music! For their debut album the guys followed the current trend of working with a varied selection of producers, all trying to create something on the cutting edge of R&B. Listening to the end result, they've certainly achieved that! One song was penned by Babyface and produced by his crew; another familiar name is Narada Michael Walden who's worked with stars like Whitney Houston, Mariah Carey and Aretha Franklin.

The mention of Walden brought light-hearted groans from the boys who remembered their studio time with the expert producer. "AAAARRRRGGGGHH-HH! He is an absolute perfectionist," said Juan, and the rest groaned in agreement! Michael moaned in mock horror at reliving the experience. "He spent HOURS for one part." He sighed and continued in outrage, "One background part he wanted perfect! But it paid off, " he conceded finally, "because the song sounds great!" Marvin laughed, "With Narada, I wanted to ask him what he was hearing because we went over the same part. He kept saying, "A little flat, a little sharp, a little flat, B Sharp". It was incredible. His ears are really something. It really came out on the track."

I suggested that repeating all those vocal parts must have been character building for such a young band! Carvin Jnr advised, "You always have to be patient in everything you do. In every part of your life, you have to be patient. Some things aren't gonna work exactly as you think they are. You have to learn where to listen and be obedient and take one step at a time and it'll make you a better person."

So to the future. We chatted for a while about the band's future plans and the blessings of the family name. Juan responded, "We love our family and respect them totally because they always stood for what they believed in. The Bible says a good name is better to be chosen than silver or gold. The name that we have is just a blessing to us. To go out there and be a part of the Winans because they did what they had to do. We wanna do what we have to do. I believe you will hear more. There's plenty in the family. There's a whole lot of us and the family legacy is important!"

I joked that there are probably albums to be made by members of the Winans family who are yet to be born! But for the moment the near future is more important and The Winans Phase 2 have big dreams. "Where can you fit the most people because that's where we're going!" said Marvin Jnr as he enthused, "That's where we wanna be. We wanna touch* as many people as we can. Wherever God wants us to go. I believe he wants the best for us. I believe he wants to show us a lot. We all truly believe that. We wanna save a lot of people. Arenas, stadiums, wherever his people are. Whoever he wants us to touch we wanna be ready to touch."

It may not be too long before we get the chance to catch the band in the UK because they want to go global. We chatted about the possibilities as I prepared to leave and meet another band. Carvin Jnr shared their vision, "Our territory is the world. If we are walking down the street and he lays it on our heart to talk to people, we talk to them. From one person to millions, spreading out way beyond the Church. Really it's all the people that don't go to church that need to hear about him, whether through TV, arenas, stadiums. That's where we wanna be. Definitely beyond the Church."

So they plan to go mainstream? I suspected this was a silly question as soon as it left my lips. Michael Jnr laughed in response, "Of course! That's the only way to get out to the unsaved people who don't go to church all the time, except Easter and Thanksgiving. We gotta go out into the world and save the lost at any cost."