The W's: The Oregon-based ska band 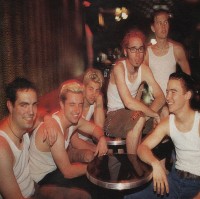 Where does the band hail from?
"The W's are from Corvallis, Oregon. It's a small college town in the Williamete valley. Either you go to school there or you raise cows."

How did you get your record deal?
"We got hooked up with Frank Tate of Five Minute Walk by opening for Five Iron Frenzy in November, FIF second CD release party. I guess Frank really liked us, so we started a developmental deal in January 1997, and then signed for a one plus three deal in March."

Why swing and not pure ska?
"Well, we tried playing ska when we first got together, Andrew, Val and myself, and now Tooth and Nail mailorder genius, Zak Shultz. With Zak on drums we tried to play ska, but we couldn't It ended up swinging. We thought it was more lounge core type music, but with the help of Maski's wonderful amount of musical knowledge, we
discovered it was a punk (fast) version of old swing."

What's life on the road like?
"Life on the road is cool. Since we are all relatively young (Brian 18 and Val 25), we tend to develop disputes amongst ourselves, but they don't last long. Besides that, the road is a blast. I wouldn't trade this job for any other in the world. We get to see new cities and I have met tons of people, and some I even remember when we return for another show. The road is cool."

What spiritual insights have you about teenagers in the USA?
"I'm not sure. I'm learning more and more as I hang out with them more. But I'm not far from being a teenager myself, I'm 22. I know when I was a teen I was always looking for something to give me an inside peace. Everything I tried wouldn't give it to me. Finally, after being raised in a Christian home, when I was about 16 it hit me what Jesus was all about. I think that's what the teens in the US are looking for, and if they hang around the right people they'll get it."

Why Christian music and not bars, etc?
"I personally don't consider ours Christian music, although we have three songs that say 'God' in them. We just end up writing about things in our lives, God, girls and next door neighbours. Right now, Frank says the best thing for us is to play to Christian crowds this first year, to help promote us. Which is cool. I guess with the right promotion behind a band in the Christian market, and being on top of the current music taste, you can really sell a lot of records and develop a fan base, but a fan base that's mostly Christian. If I had my way, we would only be playing in the bars, playing to people who don't know who Jesus really is. Besides, I really like playing music, then hanging out with people, and talking about whatever they want to talk about. If it leads to Christianity, cool, but if it leads to skateboarding, or music, that's cool too.

"But I think within the next year, we'll be playing to the crowd that isn't Christian. That's the other thing that sucks about the USA, we have two music markets, a Christian market (where most of the time the only people who buy the music are Christians) and a 'general' market (which contain mostly people who are not Christian. Some Christians buy the general market music, but some Christians consider that wrong. I don't really understand why."

Originally published as part of The Ska Story: A history of the genre

For more on The W's visit the The W's artist profile