R&B/pop may have stolen the singing style and soul savvy of gospel divas, but on today's British scene several hugely talented singers are determined to remain true to their church roots. Mike Rimmer spoke to four of them. 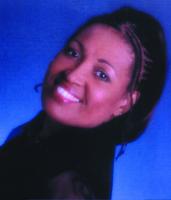 Thea Wray was born in London but raised in Jamaica. She's been living back in London for three years and confesses that around the bus stops of the capital she makes an interesting sight. "When I came back to London, God told me to concentrate on gospel music. He started giving me a lot of music and the ability to put verses from the Bible to music. It was really awesome. I was waking up with a song in my head, waking up with words. I walk around now with a Dictaphone singing at bus stops! You might see me huddled behind the bus stops singing a melody here or there. I remember with one song, I was in Camberwell and it was raining. This melody came to me and I had to go behind the bus stop and I could see people kind of looking at me and I said, 'Well, if I don't sing this I'll forget it!' That's how it is with melodies, you'll remember it and then an hour later it's gone."

In Jamaica, Thea had sung on the jazz circuit and had recorded, but her album 'Noboundariesnobordersnolimits' is her gospel debut. The style of the album is very varied from reggae to gospel, soca to pop. "The music is however it comes to me," she explains, "and I hate to be labeled. So it's just how the song comes to me. If it comes to me in a way that happens to be in the reggae genre, well then that's how it's going to be. I don't have any preconceived notions where I go, 'Oh, it HAS to be jazz!' or 'Everything's going to be pop!' Nah!"

Although Thea had made a commitment to God when she was younger, she drifted away from God. It wasn't until her life fell apart in Jamaica that she really saw God work in her. "I went through a life shattering experience. I was in the corporate business world in Jamaica and that fell apart business wise. Then my marriage fell apart. I ended up saying, 'Lord, I have to come back to you because everything else around me has gone. All the structures that I used to hold on to are gone.' So I came back to him fully in the late '90s. I actually left all the corporate world and went to the north coast. I used to work just in the evenings singing jazz so I had all day to really meditate and read my Bible and that was the journey. He healed me. The Word is what you need to stand on in ALL occasions. I went to my Bible and it was God's Word that spoke to me. I started to live in his Word, to read his Word and to talk and spend time with him. So that's what helped me. I did a bit of counseling of course but more than that, it was the Holy Spirit through the Word of God that took me through that journey really."

These days Thea has a word for those who are prodigals like she was. "Basically, the Lord wants them! It doesn't really matter what they've done, as long as they come and confess to him. I've done lots of stuff in my life and there's no one perfect. So if they hear the Lord calling them, they need to just come back to him because he is SO willing! I mean, there'll be singing in Heaven for one soul that comes back! So that's what I have to say. 'Don't worry about what you've done, just come back.'"