Out Of Darkness: The seminal rock band of the early 1970s

Back in the early '70s, OUT OF DARKNESS were pioneers in fusing the sound of rock to the gospel message. Long gone, they've not been forgotten as was demonstrated by the speed with which their limited edition from-the-archives release on Plankton was snapped up. Andrew Long spoke to the band's one-time drummer Tim Anderson. 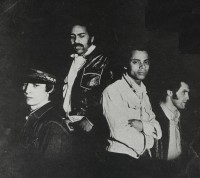 In the early years of British Christian music, after the first wave of turtle necked troubadours began to perform 'Christian beat music' in fishnet-festooned coffee Christian bars, Out Of Darkness emerged onto the scene in 1969. The band were the seminal Christian rock band of the early 70s, pioneers in their field, pumping out a cocktail of soul, gospel and Hendrix-style rock and cited as inspiration for bands like After The Fire, U2 and The Alarm.

The original line up of Out Of Darkness was formed in 1969, the various members coming from three bands, The Pilgrims, The Soul Seekers and Insight. Tim picked up the story: "Key Records had known about us as musicians before we came together as a group and they were very interested in us. The Soul Seekers were one of Britain's first black gospel groups and they had toured the continent and released several records. The Pilgrims had also released several singles and I had become a session drummer. Key Records offered us a deal after we had been playing together for only four days."

Soon the band went on tour with other Key recording artists, which resulted in the live 'Sound Vision' compilation album on which they were featured. Out Of Darkness created huge waves of excitement at every venue they played and were quickly installed into the City Of London recording studios where they laid down the tracks for their eponymously titled debut album.

The line up at the time was Wray Powell on guitar, Carl Grant on bass and gongos, Tony Goodman on vocals and Tim on drums, who also contributed a hammer and wire cutters percussion track to one song. The album was recorded on a basic eight-track machine and was completed in a week. It sold very well on the 'Sound Vision' tour and through record shops and bookshops as well as mail order. It was the best selling gospel album of 1970. However, these were early days for the industry and the numbers sold were relatively small.

Interest in the band continued to grow. Out Of Darkness were playing in the major clubs in London like the Flamingo and the Marquee as well as getting good slots at many large festivals including Reading, Phun City and the Jesus Revolution in Edinburgh, which was recorded by the BBC. But there was always an element of controversy as Tim explained to me.

"Wherever we played audiences became very excited, some people would run to the front, whilst others would walk out. Some Christians could not cope and rock audiences were taken back by the spiritual content in the songs. The racial mixture and Christian element caused a culture shock reaction. We sparked off a press debate and began to receive letters looking for an, explanation. Key Records began to have second thoughts. But the people who really understood and appreciated us were other musicians and artists. Cliff Richard explained to his audiences that Christians could play 'underground' music. The members of After The Fire met at one of our gigs and Steve Fairnie became a close friend. Last summer I played a gig with Glenn Tilbrook of Squeeze and he sang 'Cocaine' to me to show that he remembered and liked the song."

When Tony Goodman left the band and Wray Powell took over as vocalist the band rehearsed a completely new set which Tim describes as sounding very much like Jimi Hendrix and the Band Of Gypsies. Bruce Duncan joined as bass player so that Carl could play percussion and piano. It was during this period that the band reached their peak of creativity. But the major recording contract remained as elusive as ever and they eventually disbanded in 1974. Wray Powell had left to follow a solo career, he had apparently been demoing for a major label and they came to a point where they had to decide between signing him or another artist. They signed the other artist whose name was Joan Armatrading. Nevertheless Wray went on to have a successful career and eventually bought a farm in Jamaica where he settled.

Carl, Denver and Bruce all emigrated to Canada to follow various careers whilst Tim stayed in Britain where he is now a senior lecturer in Movement Studies and the Performing Arts at Southwark College.

Meanwhile the 'Out Of Darkness' album was creating stirs of interest in the collectors' market because it was both very good and very rare. It increased in value again and again and is currently listed in the Music Master Guide at Â£300. A chance discussion with Simon Law of Plankton Records led Tim to dig out some tapes the band recorded in 1972 at the Celebration Club in Kent at the close of a tour. Plankton arranged for producer Nigel Palmer to work on the tapes and in 1993 The Celebration Club Session' was released, 21 years after being recorded. The CD only release was restricted strictly to 1,000 copies to snare the interest of the collectors' market.

The material on the CD reveals a band that had matured significantly since the debut album, the Hendirx influence is overwhelming, indeed Tim considers Wray to be "the British Hendrix". The six tracks stretch into mammoth rock improvisations taking in the soul, jazz, gospel and African elements that make them that little bit different.

Tim told me that the possibility of a reunion gig is not as unlikely as it may seem. In the meantime he is busy playing in Sky Church, a Hendrix tribute band with guitarist Keith Olyva and ex-Clapton bassist Dave Markee. Tim and his wife Edna Duffin also run the Big Top at the Greenbelt festival and Tim sometimes sits in as a drummer there.

"If the interest in OOD continues," Tim concluded, "there may be more material that could be released, for example one evening in 1971 we played as a five piece with Fleetwood Mac's Peter Green."
Now that would make an interesting collector's CD.

I remember a song based Psalm 139 is it available in any form?