This Train: The hillbilly punks behind "The Missing Link"

Hot US band THIS TRAIN's Mark Robertson was quizzed by Mike Rimmer. 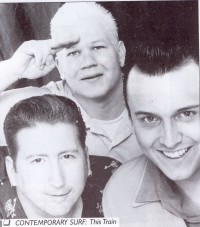 This Train's second album 'Mimes Of The Old West' combines some sensitive poetic moments with a whole pile of rockabilly surfing good time fun tunes. A curious but down to earth mix. In recent years, Mark Robertson has been a member of Rich Mullins' Ragamuffin Band so as I start the conversation, I know there's going to be plenty to talk about! I'm shouting down the telephone and he's talking from a cell phone outside a restaurant in Nashville. Thankfully he's just eaten lunch!

To say that This Train's leader Mark Robertson has been around a bit when it comes to playing with bands is an understatement - Adam Again, The Altar Boys, Allies, The Stand and Brighton have all benefited from his talents! I suggest it's interesting to look back at all the album covers for the bands he's played in over the years just to see the amazing things that have happened to his hair. He laughs and responds, "Yeah, a lot of people have a sense of humour... I wear mine on my head."

That sense of humour translates powerfully into the band's music. The first track that leaps out of the speakers is the hilarious "We're Getting Nowhere Fast", the ultimate slacker anthem for a band struggling for recognition. I venture that when they have success the song will be rendered a lie! Mark responds, "Certainly when I wrote it, our plan to be obscure and poor was working out great, and now we have this pesky record company that's trying to give us money, and now people know who we are, so we're a little confused as to what to do now." I wondered how he was going to cope with fame. "Well, we're not holding our breath on that!" He firmly continues, "And if there's one thing I'd say that is a ministry about This Train is that we don't think the Kingdom has any place for rock stars. So we don't ever plan on becoming rock stars even though we certainly want people to hear the music and we hope that they like it." This Train is the first band that Mark has fronted. He explains some of the band's origins, "My biggest thrill was being in Rich Mullins' band for the last four years - so This Train was always part time. And Rich was really digging This Train, and insisted that we open for him, 'cos I was already in his band. My guitar player Jordan, he was Rich's sound man, and our drummer Joe was on the road crew. So he said, 'Well you guys are all here, why don't you start opening up?' So we did a hundred shows with Rich last year and he really is the one who turned This Train into a full time thing for us. It was his idea."

The band's distinctive sound is created around a huge '60s guitar influence. Mark explains, "We're pretty huge rockabilly fans and then the '60s thing is surf guitar, which Jordan's a huge fan of. I'm more '50s and Jordan's more '60s, and somehow it seems to work. Rich Mullins always called us "Hillbilly Punk", which works for me. I don't know what it is, I just like it."

Having worked with Mullins for four years, I wondered what Mark learnt from Rich during that time. Robertson is thoughtful before responding, "I felt like he really did it right. I will say I have never met anyone who I knew was set apart by God to do what they did, except for Rich Mullins. I know beyond a doubt that God set him aside and had very special plans for him. He was a huge influence on my faith; he knew more about the Bible and the history of the Church than anyone I ever knew. He had a very simple practical faith and you could see Christ in everything he did, and I guess what he has left me is a stronger desire to do that - in every moment and in everything I do, to emulate Christ as much as I possibly can."

Mark reflects on how that influence works its way out in This Train he says, "The band is fun and it's very entertaining and I hope the people like it, but really, I think we have more of a ministry when we're out on the road in a van. It's treating each other with dignity and respect and being a friend to the people who come to see us and I think that's more of a true ministry than getting up on a stage and playing music. When it comes to it, it's the other 23 hours of our day that are where the true spirituality comes in." Mark describes where he was when he heard that Rich had died. "I was with him about two hours before he died," he responds. "I was in Ohio, taking a small vacation, because Rich and I had just produced a record. The day he died was the last day of tracking the record for a new artist named Mitchell Vicker. I checked my messages, and I had about 30 messages, none of which said what happened, just 'I'm so sorry, I'm so sorry'. I finally called a friend who told me to sit down, and told me the news. Basically I cried all night. I feel happy for Rich - he's where he wanted to be, where he always wanted to be, so I'm sure Rich is fine. I feel sorry for me that I have to be without him, as my friend, and I'll never get to play music with him again, and how much I would miss his friendship, and his example to me as a Christian."

Mark recorded a Rich Mullins song, "A Million Years", on This Train's album. He explains, "I was working on a record I was producing for Rich that was called 'Canticle Of The Plains'. We were just working together on the record and I was starting to write for the new This Train album and Rich had a song so we started working on it. He played it for me and I was really knocked out by it. We went down to the reservation where he lived a couple of days later and we finished writing it. We played it for his church and they really liked it. So we just recorded it. So that song has been real therapeutic that I got to do that, collaborate with my favourite songwriter in the church. So I would say it is the highest honour I've ever been given."

One of the fun songs on the album is the title cut which begs the question, what does Mark have against mime artists? "We have nothing against mime artists," he claims. "When we wrote this song it was just a joke and it was just for fun. I thought it sounded funny when I was just writing lyrics, free-associating. I wrote 'Mimes For The Old West' on a piece of paper and I thought it sounded really funny. Then I thought what it must be like to run around Dodge City in the 1800s with clown make up and tights and all that and how these tough guys were probably just beating the daylights out of them. That just struck me as a funny concept."

Mark continues by describing a rather curious backlash! "We thought there are probably about four mimes in the whole world. Well it turns out there's a lot more and they're all angry at us." He continues in ironic fashion, "I think that my biggest mistake was to assume that if you go out in public in a black leotard and clown make up that you probably had a sense of humour. But it turns out we were wrong. We've had some mimes get up on stage while we played and do mime and stuff like that. Some of them get the joke and they're cool with it, and some of them are a little hostile. So if you're looking for any deep, spiritual meaning to the song 'Mimes Of The Old West' you won't find it. It's just a goofy song."

On a more serious note Mark chooses "Goodbye" as his favourite song that he's written. "Rich Mullins thought that it was the best song that I'd ever written as well." Mark is clearly proud of the endorsement. He continues, "Jordan was a very big part of that. When I wrote it, it sounded like a very typical This Train song, but the lyrics were very special to me. Jordan and other friends were the ones who said let's rethink this whole song. It is about the longing for heaven, and the struggle of being caught between heaven and earth. It is about all the struggles we have on earth but the desires to be like Christ and someday to be with him. It was really more their idea to make the song spacey and ethereal and more like the lyrics sounded. They talked me into stripping it down and starting all over again. I couldn't be happier; it was one of the most collaborative things we've ever done. I'm probably proudest of that song more than anything we've ever recorded."