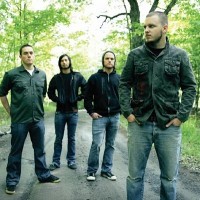 A great deal has happened to Orange County screamo band Thrice since Cross Rhythms interviewed them in 2003. Back then, after an independent EP and two albums on the tiny Sub City label, the band had just signed with Island Records. Signing with the mainstream giant catapulted Thrice into the big time with their Island debut 'Artist In The Ambulance' making 16 in Billboard's mainstream album charts. Since then subsequent albums have all been hits, 'Vheissu' making 15 in 2005, 'The Alchemy Index Vol 1 & 2: Fire & Water' number 24 in 2007 and 'The Alchemy Index Vol 3 & 4: Air & Earth' number 15 this year. Thrice have become renowned for pushing back the boundaries of what you might expect from a screamo/metalcore band. While many bands of the ilk languish in an unimaginative and hugely stylised musical backwater, Thrice - Dustin Kensrue (vocals, guitar), Teppei Teranshi (guitar) and sibling rhythm section Ed Breckenridge (bass) and Riley Breckenridge (drums) - have shown themselves to be courageously creative. 'Vheissu' was described by one critic as "a far cry from scene-metal and a beautiful yet calculated risk to their fans and industry alike"; the first EP from 'The Alchemy Index Vol 1 & 2: Fire & Water' was a barbaric blast as heavy as the band have ever been while the second volume - with its ambient vibe, samples, keyboards and light, melodic vocals - sounded to some like a completely different band save for Dustin Kensrue's highly distinctive vocals.

Dustin spoke to HM magazine about the release of 'The Alchemy Index' EPs and the band's departure from Island to Vagrant Records. "We were pretty much done with the new record and they (Island) began mentioning parting ways. This is something we had wanted to do but couldn't instigate for obvious business reasons. The label and our band were going in opposite directions. Many of the people who were there when we signed were gone. We just felt like it wasn't going to work. They said they didn't know what to do with our record, so it definitely wasn't a bad break. After we left, we really didn't shop the music too much. Rick at Vagrant had wanted us for quite awhile and we had known him for a long time. They are local for us in Southern California and it seemed like the move that would make the most sense for us. They are a label who still put a good deal into marketing while giving us the creative space we need."

'The Alchemy Index' volumes were, unlike their predecessors, produced by the band themselves. Dustin felt it was an easy decision to make. "Teppei, our guitarist, actually recorded my solo album last year, so I already had a rapport with him in terms of recording. I have a lot of faith in his opinions, so it was a very easy and open process. I feel like, with this record in general it would have been awkward and strange for a producer to come in, because it's too broad and all over the place. A producer would have tried to reign things in and focus them, because that is their job. Because we wanted to do the opposite with this, it just made perfect sense to do it ourselves. My hope is that we stick to this formula in the future, for both economic and creative reasons."

It was the release in 2007 of Dustin Kensrue's independently released solo album 'Please Come Home' which, with its explicit faith songs, finally laid to rest the "is he a Christian" debate that had been clogging up fan websites for years. Now Kensrue's newly found spiritual boldness is evident all over 'The Alchemy Index' EPs. For instance on the 'Fire' disc, Kensrue quotes the prophet Isaiah in the song "The Messenger" and in "King's Upon The Main" on the 'Water' CD he offers the couplet "But grace can still be found within the gale/With fear and reverence, raise your ragged sail." 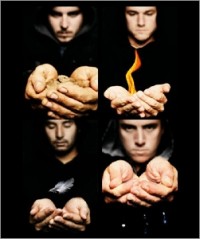 At the time of the solo release Kensrue discouraged the idea that his songs have less spirituality in the context of Thrice, but rather are implied by the more intense context. "That's not the way I write songs," he told HM magazine. "It's a little hard to separate it in any meaningful way and make a clear distinction because there's such a different vibe musically. I think it's a lot more of a case of matching the lyrics to the feel of the songs."

Acknowledging that not all the members of Thrice think exactly as Kensrue does, Riley Breckenridge said that he and the other members of the band are more than comfortable that "Dustin writes 100 per cent of the lyrics." He told CCM magazine, "Not only because he's a gifted lyricist, but he's singing about things that matter to him and that matters to me. I'm glad that he feels confident in what he's saying and what he's been putting out there. Even if I don't agree 100 per cent, it definitely makes me think. And I think that's the goal of his lyrics, to make you question why you believe what you believe, how you go about finding answers to some of life's harder questions." Further, said Breckenridge, "In the scene we came out of, there's a lot of angst and 'woe is me' in the songs. I think it's cool that Dustin's lyrics have been so hopeful."

Considering the excellence of Kensrue's lyrics, it's a little ironic that one of the most admired tracks on 'The Alchemy Index' EPs is "Night Diving", an instrumental. Dustin recounted the track's origins: "It's really surprising the response we have gotten with that song. We didn't see it as a focal track initially. We sat around and made a storyline about a person diving at night and the things that he saw. We storyboarded the whole song and what was happening in the song. A guy is on a boat in the beginning. When the drums kick in he dives into the ocean in old scuba gear (the 20,000 Leagues bubble-head), then he sinks into the water as the song develops. He witnesses a sperm whale fighting a giant squid, as an observer to what is happening, but not a participant. The creatures and world around him don't even notice him. The vocoder part later in the song he ends up running into these sirens and it seems very peaceful, but then it turns very bad. He is caught up in a threatening situation, yet somehow he makes it back to the surface after nearly losing consciousness. There is a moment you can hear near the end of the song that sounds like emerging from the water. He comes back to the still surface, to the night, and recalls all he witnessed. Things like this song are what made doing this album ourselves so enjoyable."

HM finished their interview with Kensrue talking about the band's Christian convictions. "We don't have a spiritual agenda, specifically. But, the things I am interested in are the bigger questions of life. I document my various conversations with God and struggle with him. I try to be real about who I am and write about things I actually mean or want to mean at the time. There's certain songs I don't even know why I wrote them. I think that it was God using me to say something. When the songs affect someone, my response is: 'I didn't really do this, but thank you.' I try to live my life in a way that's honouring to God and follow Christ's example, but there are definitely people who call themselves Christians who I wouldn't like to be associated with. Honestly, though I would rather be part of the solution to that than make up some new name for myself."

For more on Thrice visit the Thrice artist profile