Having candidly gone on record to say that he previously found it irritating and something to be endured at the start of a church service, it appears that Glasgow-based experimental singer/songwriter Tim Kwant has had something of a road-to-Damascus experience in relation to his attitude towards worship music. Following a subsequent encounter with God whilst working in India, his latest recording 'Raqad' - meaning "to skip around, to dance, to leap" in Hebrew - is surprisingly a pioneering piece of worship that represents something of a musical change of heart for the talented 24 year old who now confesses that worship music is of vast importance in his relationship with his Saviour.

Born in Loughborough to South African and Dutch parents, Tim's journey to making his first worship album is a long one. Having started life musically playing the recorder before taking up the saxophone, it wasn't until his mother bought him his first guitar that things took off from a songwriting perspective. Tim soon developed an ardent interest in experimenting with different sounds and recording techniques and leftfield albums such as 2007's self-explanatory 'Three Years And A Computer' and the bleak 'Crippled And Cursed' (2009) soon followed. Keen to venture into different musical frays, 2011 saw the issue of the electronic 'Fear No Evil' EP and its parallel acoustic counterpart 'If There Was Love' before the self-recorded, produced and packaged release of 'Raqad' earlier this year.

I catch up with Tim to find out more about how he came to record his first ever worship release. "About two and a half years ago, I had a real spiritual encounter in India when I was working over there with a Native Missionary Movement orphanage and school," he elaborates. "In India, they were singing seven minute songs that said very little - most of which was in Hindi - and although the singing and band weren't what we'd call amazing musically there was this incredible presence of God in the place. The music turned into this beautiful thing in my mind and God led me to treat worship music differently from then on. Before that, I really didn't enjoy the worship times in church - I used to just go to church to hear someone preach - and then it all of a sudden became important to me.

"I came back home and I began to love singing worship in church but it was the personal worship times that I couldn't get into," he continues. "I wanted something that was explicit where I could just sing praises to God but with music that really resonated with me personally. The aim for the 'Raqad' album was for the worship to be personal and I hope that people who like the same kind of music that I do will be able to fire the headphones in and just have an intimate time with God." 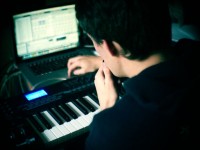 Whilst journeying into familiar territory with its overall aim to praise God, 'Raqad' stands out as a ground-breaking piece of work thanks to its creator's experimental approach to music. I ask Tim what he feels makes 'Raqad' different from the more regular worship releases that currently flood the marketplace. "Lyrically, it tends to focus less on emotions than some other worship music does," he offers. "It's not that I'm against emotional worship music but all I wanted to write was the truth. Production-wise, it's different too - it's got a kind of darker edge to it."

The album's title track - a 12 minute instrumental electronic epic - seems to typify Tim's approach to music and worship in one fell swoop. "That track's been on a journey. I was writing a song for the band I'm in (Kill The Waves) and it just wasn't working. I started adding to it in my spare time and it became a solo project. Once I'd made it, there was something about it that felt really free and joyful. Before, I would never make joyful songs - they used to be full of teenage angst - so it was like a new dawn for me. It's become my favourite tune on the whole album and it's one I can dance about and worship God to - even without words. I feel it expresses more than words possibly can."

I wonder if any songs from 'Raqad' have been tested in his local church. "To my shame, I haven't even tried to play them in church yet," Tim admits. "I sold copies of the album at my place of worship, Hope Church in Glasgow, to raise funds for my year there working with students. I was expecting people to be polite and secretly not like it but I'm really surprised about the amount of folk who truthfully like it.

"If there's anything holding me back from trying some of the songs from 'Raqad' in a congregational setting, it's because I'm constantly writing new stuff with people from the church," he adds. "We've started doing creative nights together and the songs that come out of those sessions are easier to bring into church because there's more of a group ownership on that song rather than just one person bringing it."

I ask Tim what these sessions entail. "Well, we have praise nights where we just get a bunch of people together and worship God with all sorts of instruments like banjos, accordions, mandolins, glockenspiels and guitars," he elaborates. "It's just a time of worship and very spontaneous and we have different themed nights. One of our best ones was a jungle worship night where we had five drummers and three djembe players amongst other things!"

It seems that the creative nights that Tim fronts have had a positive impact on not only his church but for worshippers further afield. "We had one time of worship where a song called 'We Will Praise You' came about," he enthuses. "There was something about that song that felt amazing and the presence of God was really near to us. Someone saw a recording of it that we had put on YouTube and they posted it on the God Vine website. Five days later it had had about 12,000 views and people were saying how blessed and inspired they'd been by it. It was so encouraging because it was the simplest song ever and we were just praising God."

This involvement with corporate worship has marked a change in Tim's approach to lyric writing as well as his overall attitude towards praise music. "Lyrically, I've had a big paradigm shift in the last two years," he states. "Before, I was of the mind that life was depressing but ultimately God was good and everything would be put right eventually. To be fair, part of my earlier work was written in a time of real personal depression and some of these songs were naturally of a more lamenting nature.

"Nowadays," he finishes by saying, "I want to write songs that are beautiful and joyful because God has given us a spirit of love, joy and peace. Over the last two years, my life has been a testimony in many ways to the love that God gives us. My focus has shifted from 'someday God's going to put the world to rights' to 'the kingdom is here right now and we're part of it'. I'm glad to say these days my songs are much more about Christ's love in the here and now."

TIm visit Pakistan and worship with us here.