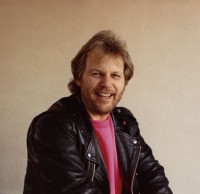 Hitting the streets for the first time were some classy debut albums by Julie Miller (pictured), Witness, JAG and Rick Elias & The Confessions... and Shout announced that they had metamorphosed into Magdallan and slimmed down to a two-piece, Ken Tamplin and Lanny Cordola.

In the UK, 21st Century Christian carried the usual news and reviews, examining albums by The Vineyard, Russ Taff, Philip Bailey, Ian White, Steven Curtis Chapman and Don Francisco (slightly belatedly, as the album in question live In The UK' was already at No 1 in the 21CC album chart). At No 2 in the album chart, Martyn Joseph, gave full interview in the April issue.

Getting the big push from Premier were new releases by Adrian Snell ('Father1), Graham Kendrick ('Amazing Love'). Chris Bowater (In The Stillness') and 'Phil & John Live'. And the review section of Cross Rhythms magazine gave the five star 'indispensible' accolade to 'Revival' by David Mullen ("...an absolute gem... commercial, unpredictable, superbly arranged, very real and totally without compromise..."); 'Call It Whatever You Will' by Nobody Special (Christian punk from the US described by the reviewer as "(music) with venom and speed, and very scriptural"), and Birmingham white metallers Seventh Angel's four-track EP 'Heed The Warning'.

Fascinating reading in the May 1990 CCM magazine, was an in depth interview with Rich Mullins, just after the release of 'Never Picture Perfect', his fourth album, and arguably second only in quality to 'A Liturgy, A Legacy & A Ragamuffin Band'. Talking about the thinking behind the setting up of The Kid Brothers Of St Frank with his long-time pal and songwriting partner Beaker, Rich revealed that he had considered becoming a monk, but couldn't come to terms with Roman Catholicism. But then he thought, why should the fact that they're not Catholic stop them from creating a religious order? And the Kid Brothers stayed close to Rich's heart for the rest of his life.

ICC Studios of Eastbourne announced the setting up of their own record label, to be known as (wait for it) ICC. ICC as a studio had been going for 15 years, and since the middle of 1988 had been establishing a distribution network to Christian bookshops for their teaching tapes and Spring Harvest Kids' Praise albums. First release on the new label, 'A Change Is Coming' by The Remission Choir from Walsall, West Midlands, who were booked to appear at all three Spring Harvest venues.

Adrian Snell's new album, 'Father1, dedicated as a tribute to his father, former Bishop of Croydon Geoffrey Stuart Snell, who had died in July 1988, was set for release in May by Word Records. At the same time, Adrian was preparing for a tour of Holland, where he would be reviving his concept musical The Passion', which had caused such a stir 10 years earlier.

Worship leader and songwriter Dave Fellingham has formed a band called Opus and has become the first Christian band to be invited to the Brighton Festival. Playing a style of music that Cross Rhythms described as "covering the range from electronically enhanced classical music to jazz-rock," Opus featured in its line-up such luminaries as UK gospel diva Nanette Welmans and virtuoso trumpeter Raul D'Oliveira.

Metal Meltdown, Europe's first white metal teach-in, had been arranged for November 1990; one of the speakers would be Roger Martinez, of US thrash team Vengeance Rising. VR's much delayed second album 'Once Dead' was finally due for release in May. And Britain's first new contemporary Christian music shop Dual Edge, in the heart of London's Soho, had discovered that at least a third of its customers were not-yet-saved. Dual Edge had advertised in the heavy metal fanzine Kerrangl, which had prompted a stream of metalheads to investigate their stock of white metal releases. However, the first person to be saved through the ministry of Dual Edge was in fact a
jazz fan, who strayed into the shop by chance. Dual Edge had also received coverage in the Weekend Telegraph on 3rd March.