Tony Loeffler: An American bluesman and musicianary honoured in Cuba

Tony Cummings reports on one of the most effective evangelistic music ministries in America, TONY LOEFFLER 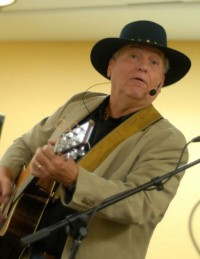 In his 42 years of music ministry New Jersey's blues and Latin fusion artist Tony Loeffler has become a giant of Christian music ministry. Tens of thousands of prisoners have become Christians through his ministry. His recordings, made with no record company or management support, including his groundbreaking 'The Rooftop Tapes' six-album series recorded live on the rooftops of American prisons and his largely Spanish language album 'Cuba Para Cristo' have received much critical praise. With his old band The Blue Angels he has embarked on numerous overseas tours, once playing on almost consecutive days the Cross Rhythms Festival, Dartmoor Prison and the Montreux Jazz Festival. Loeffler's tireless contributions to both music and ministry have at last been recognised. While on tour for a five-day prison event in Colorado Springs, Loeffler was inducted into the Blues Hall Of Fame. And on a recent trip to Havana, Cuba, Tony Loeffler & Fusion Blues had an opportunity to play an historic concert with Cuban music stars Bobby Carcasses and Afrojazz, being the first American group in 50 years to play with a Cuban band at the famous Teatro Museo Nacional de Bella Artes. In an interview with Jacomino published in the Gramma newspaper Tony spoke about his trips to Cuba and his passion for the Cuban people.

Jacomino: When did you first visit Cuba and what are the main reasons for such an intense exchange?

Tony: My first visit to Cuba was in 1999. I was asked to visit Cuba as a guest by a security guard who worked in a Florida prison where I was performing a series of concerts. He was helping some children in the Havana area at the time. I was performing concerts for 28 years, many being in the prisons, and asked this person, "Do you think I could perform for and encourage the prisoners in Cuba." He quickly said, "Yes," so I joined the trip. We never did get to visit the prisoners but I loved the Cuban people and the country on that first trip. It reminded me of my childhood. I grew up in a very poor community in Paterson, New Jersey. We were very poor but we enjoyed a sense of community. Cuba reminded me of those early days of my life.

Jacomino: How does a musical combination like Fusion Blues, which brings together musicians from various cities in the US, work?

Tony: I have always been interested in bringing as many musicians into the prisons as possible. The music is always fresh, creative, exciting and reinforces the idea of unity and oneness. Music has a therapeutic essence to it and breaks down barriers. Many of the prisoners have ruined their lives by making some really bad choices and they suffer from isolation. These diverse musical programs create a platform for discussion about important matters like spiritual destiny. Over 100,000 have found hope and encouragement through these concerts and programs and decided to follow the teachings of Jesus Christ.
I too, was incarcerated seven times in my early days. I guess I never forgot about the hopelessness and loneliness that I experienced. The hundreds of musicians I've invited to perform with me over the past 42 years have created an amazing synergism with the music. The different art forms were brought together with a central focus in helping inmates. The end result, Fusion Blues was a pleasant surprise to everyone concerned. Bringing hundreds of musicians into the prisons allowed me to enjoy and appreciate all forms of music. My roots and background come from the blues. Things were tough for me! Growing up without a father, having a mother die almost literally in my arms and watching my siblings get beat by my father whenever he did come around the house caused me great blues. 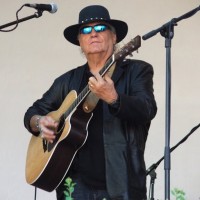 Jacomino: Could you describe your work with the various institutions in the US penitentiary system?

Tony: I have been performing musical programs for many years to well over a million prisoners worldwide. Some of these prisons were extremely poor where people died everyday of starvation, not the death penalty and some of these prisons were in wealthy nations where the prisoners had most of what they need, except freedom of course. However, the one common denominator that I noticed was that each extreme needed answers to life questions. I share my personal experience from 1971 when I had an encounter with the resurrection power of Jesus Christ and let people decide for themselves.

I believe that in 1971 when at the point of suicide, a spiritual process took place in my life that I don't totally understand but am learning more about each day. The truth of the experience centers on the life, teaching and most importantly, the resurrection power of Jesus Christ from the dead. This resurrection power has transformed my life and driven me to do the work I've been doing the past 42 years. Helping the poor, encouraging the prisoners and sharing the hope of the Gospel.

I have seen many things in my life and some would say I have a colourful past being that I have traveled extensively in countries like India, Uganda, Dominican Republic, Trinidad, Brazil, USA, Switzerland, Iceland, England, France, Germany, Canada, etc, and have seen so much human suffering. All I can say is that I have witnessed the power of this resurrection in my life. I've seen terminally ill people healed by praying over them in the name of the Lord Jesus Christ. Many prisoners have been healed in the prisons and recently there were two sisters in Havana, one who had a stroke and another who had life threatening cancer that were healed through prayer. I can tell you story after story of prisoners who have been reinstated to a wholeness of life and many physically healed by the power of God. The story of Jesus is an undeniable truth that has driven me all my life since 1971.

So to answer your question, the work I do in the prisons consists of musical programs, teaching and training in life skills, prayer and healing and encouragement. Our programs are heavy on the musical side because music seems to bring people together. We spend three days in a prison and this helps to establish a sense of community for the prisoners and a therapeutic community begins to develop. This helps many prisoners prepare for their release and helps others who have to serve the rest of their life in prison, serve with hope. I remember a general in Uganda saying after our visit, "It is easier to guard men with hope, than men without hope." Originally, he was doubtful with our visit but the results changed his thinking. 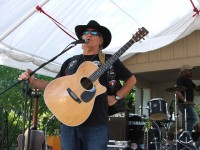 Jacomino: How did the Cuban musician Bobby CarcassÃ©s appear in your life?

Tony: A friend introduced me to Bobby about five years ago while I was visiting Cuba. Our relationship and respect for each other has grown since that time. I visit Bobby every time I return to Cuba to see how he is doing and check on his mom who is getting older. We have enjoyable conversations and always enjoy some good Cuban coffee. Bobby is a good man, respectful, talented and a good friend.

Jacomino: How do you assess the welcome that the Havana public gave to your songs and to the music project that is Fusion Blues?

Tony: I was quite amazed at the response to the music from the Havana public. I knew the music would be different from what folks were used to hearing in Cuba and because of that, there was some concern. The night of those concerts, we fused blues, jazz, country, rock, Latin and folk music together for a delightful musical experience. The people seemed to love it. I think that the public wanted to hear more and I look forward to the next time we meet. Everyone knows that some of the best musicians in the world are from Cuba and inviting Bobby and Roberto Carcasses, the horn section Jesus Recardo Anduz and Christian Pimentel was extraordinary and a great pleasure. The Fusion was something to be remembered.

Jacomino: Do you think that this most recent visit and the exchanges you had with Cuban musicians can open up a new type of exchange between the US and Cuba?

Tony: Absolutely! Music has often been referred to as the universal language and naturally brings people together for the best of humanity. I remember performing at the Sur Montreux Jazz Festival in Switzerland where we had six to nine languages on stage. Musicians could not communicate verbally but musically there was not a problem. Music seems to transcend the world of divisions in some manner. I believe that a musical collaboration can provide a new type of exchange between our nations and it would be great to see some American artists posted on the wall of the Nacional Hotel again like there were in the past.

Hi, this is Tony's sister. It just blesses my heart to see God continuously using my brother to further the Gospel. I am so blessed by his music, his talent, his preaching and his tremendous love for the Lord. God Bless you, Tony, in all your endeavors.

tony is the real deal