Tony Loeffler And The Blue Angels: The US prison ministry brought to the UK

The ministry of TONY LOEFFLER AND THE BLUE ANGELS goes into the prisons of New Jersey. This year they played Cross Rhythms festival and, as Jonathan Bellamy reports, three Devon prisons. 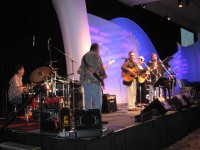 We had to leave the Cross Rhythms festival at its height. Tony Fitzgerald was just setting off on his father hearted wade through the expectant Sunday Service throng as Tony Loeffler was bundling his also expectant Blue Angels into a hire van and setting his sights on a pioneering new direction for the Solid Rock Evangelistic Association.

It was a hasty journey to Exeter Prison. We were running late and by the time we had entered the heavy gates, checked our names and lugged PA equipment and instruments to the second floor chapel it was nearly time for the inmates to be let in. Bill Birdwood, prison chaplain, was excited but a little unsure how many men would be allowed to see the 'concert'. Up to the last minute staffing problems had threatened to drastically restrict numbers, the prison governor more concerned, understandably, with prison security. Soon, however, 80-90 men filed into the modern chapel and took their seats. At about the same time Tony Loeffler was the only one who was hooked up to the PA so, very simply, very he started playing. As the amazing soundmen, Paul Collins and Lenny Belli, dashed about tweaking, twiddling, plugging and unplugging, more and more of the eight-piece band joined Tony and the increasingly attentive inmates. These guys were good!

Gradually you could see the barriers coming down: attitude, image, swagger, fear, even timidity for some. As the music ministered most men relinquished their guard and became absorbed by the atmosphere: the mesmerising Wayne Scott Farley, with his truly electric guitar and his lovingly sincere smile, subconsciously spoke of trust; the seated and blind bass player John Hess conveyed humility; fresh-faced Linda Salisbury on jazz-saxophone was a light of innocence; Karen Sibilia on acoustic guitar and vocals offered honest transparency and the three guys on percussion, Bob, Dave and Joe, beamed with friendship and understanding. Tony himself was the focus of fatherly authority. I've been where you are now. Worse, I was in prison seven times. I've been to skid row. I understand how you feel," he shared.

Some of the men were absorbed, but others were agitated. Some even left, struggling inside with the very obvious presence of love and the very real presentation of truth - no gloss, no soft sell, just the testimony of changed and challenging lives. Wayne talked of salvation and the Christian walk; Joe shared his crazy life of drugs, crime and more drugs and about two thirds through the set the ninth member of the group, Mark Tirondola, left his seat with the inmates to preach a short sermon based on the passage of blind Bartimaeus shouting and pressing in to grab Jesus' attention as he walked by (Mark 10:46-52). The analogy was that when Jesus walks your way don't let him pass you by even when the crowd are against you. All the men listened as Mark related his gangland lifestyle and how it had taken nine times in prison and squalid solitary confinement before he had finally called out to God. He urged them not to wait like him.

Very quickly the allowed time was drawing to a close. As Tony shared his testimony and went into the final song you could feel the taut stretch of tension in the atmosphere. Because of the time, Tony had made a very simple offer. If anyone wanted to know this Jesus that he knew then they were simply to stand while the band played the final song to acknowledge it. Incredibly, there was no response. Wrestle was written on numerous faces, but no one could make the stand.

As the last strains of "Touched By His Love" reached a final cymbalic crescendo one man, two thirds back on the right hand side, stood up. But he didn't just 'stand' up. It was a definite, bold, direct, "I'm making this choice right now whatever the consequences" stand. He had waited until the very end but he definitely would not "let Jesus pass him by."

It is hard to convey the feeling of watching, one by one, 19 other men make their stand. Some had sat stony-faced, some acutely interested, some uncomfortably shifty, but all, at the last, were prepared to lose credibility amongst their peers and respond to the pull of God in their hearts.

With little time left Tony led them in a prayer of commitment and soon after prison staff led the inmates, Christian and non-Christian alike, back to their cells. As they left many came forward to shake hands and say a few words to the group, some visibly touched by the experience.

This was Exeter. The following day a group of three were allowed into a small room on the sex offenders wing at Dartmoor Prison and on the Tuesday the full group was once again performing, this time at Channings Wood prison near Newton Abbot. Similar responses were made at both prisons.

Jeff Bird, the chaplain at Dartmoor, said recently, "Many men realise they are on their own when they go to prison and that their strength is limited. Becoming Christians often provides them with an inner support...We had some visiting American evangelists recently who had been in prison and they caused a great deal of interest with the men while they were here."

One necessary development since their visit however has been the setting up of the UK branch of the Solid Rock Evangelistic Association. Having received several letters from inmates who were touched by their ministry, each wanting to know more about Jesus and needing a Christian pen pal, it became apparent that because of the high costs involved in international correspondence a UK base of pen pals was needed.

To bring Tony Loeffler And The Blue Angels back to the UK again next year is already in the pipeline. They are hoping to come for three weeks, not only for the Cross Rhythms festival but also for other gigs and for further prison events. To do this however requires financial and church support. This year Tony and the group paid their own way, simply to be a part of the Cross Rhythms festival and to serve what they perceive God is doing in the UK. In 1996 they will need the help of British Christians.

Regards Mike, other friends in the work of God,we are very much glad to let you know that is just now we have visited you touching, moved,spiritual and well equiped with what of God that we had looked for along time but today we have found on your website.we are happy that we have found the loving and working friend of God.Kindly we are so new,young and in short born again to the word of God.So we pray that for you to come in our church and teach us the Word of God.the place i come from,there is no honestly the living word of God like the one we have seen here.Kindly,help us to know even the little about the word of God.Happy to hear from you again.
Love and welcome in our church kindly.
Evangelist Jorom and the church