Tori Harper: From songs about battling with depression to a song of revival 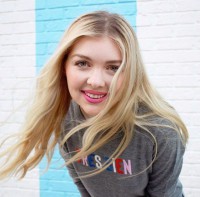 For a singer/songwriter who is still a teenager, Franklin, Tennessee-based Tori Harper has had almost unprecedented success in connecting with Cross Rhythms radio listeners. So far, her radio hits have been the 2017 singles "After Dark" and "Joy"; and "Stand Firm" and "Seasons" from her 2018 EP 'Seasons'. And now the recently added "Revival" is shaping up to be her most popular track so far, which is particularly heartening for those who are longing to see Holy Spirit revival coming to the nations of the world.

Harper has been sending out review copies of "Revival" with the book Revival Starts Here by Dave Clayton, who is lead church planter and pastor of Ethos Church in Tennessee. Speaking about the book and her song, Tori said, "Revival Starts Here is a book that powerfully and practically lays out what it means for revival to start inside of us. It answers the question, 'Now that I want revival, how do I start?' It is so amazing how the vision God gave me when I wrote the song 'Revival' and the message of this book so perfectly align. I am so in awe of God's perfect timing to be able to send them out together. It is an honour to partner with Dave Clayton as we spread God's vision for revival, and I pray that the book and the song inspire something new in your community!"

Harper continued, "God is stirring something new right now! He is moving many to pray and putting the vision and inspiration of revival on our hearts!"

Clayton himself said, "Over the years, in churches all across the country, I have had countless conversations with people-young and old-about the growing fire Tori describes in her song 'Revival'. Many followers of Jesus are sensing that, to put it in her words, the 'fire is getting stronger and it is starting in [their] souls.' Not only do I love this song but also I love this message because it is becoming the heart cry for so many."

Co-written by Harper, Colby Wedgeworth and Cindy Morgan, Tori's radio hit was produced by Colby, who's also worked with CCM hitmakers Jordan Feliz, Mandisa and Danny Gokey. Tori's recording career began in 2017 with the release of the "After Dark" single. The song was written for the sister of a friend who was battling bulimia. The song's lyrics tumbled out as she struggled to find the right words of hope-filled empathy to extend to the girl, whom she had long admired. And in a sense, that's what all of Tori's songs seek to do. Like a familiar conversation with a trusted friend who knows you best, Tori's music wraps its way around your heart, feeling more and more like home with every note.

Tori's next single, "Joy", released in September 2017, spoke about the singer's own experience as she wrestled with depression. She said at the time of its release, "'Joy' is personal to me. I've dealt a lot with the Enemy throwing all of the negative things about life and how even when my circumstances didn't look that great in my face. But, the Lord has been showing me through writing this song that joy is so much deeper than happiness. And, it doesn't depend on your circumstances. It depends on God. And, he's constant and faithful and we can depend on him. We can depend on his faithfulness. I feel like the joy we can have comes from knowing him, and knowing that he promises us that he'll work everything out for good--and he's always working for our good. Because of that, we can have hope. And, it's even more solid than hope, because we know the final story and he has the final say. We get joy from knowing that everything is going to work out. We get joy from his presence. That's the story behind this song."

In 2018 Tori released the EP 'Seasons' which, as well as her "Joy" and "After Dark" radio hits, contains the title track and "My Father, My Shepherd" both produced by Grammy Award-winning Seth Mosley (For King & Country, Skillet) and Mike "X" O'Connor (Brandon Heath, Colton Dixon), as well as another Cross Rhythms radio favourite, "Stand Firm", produced by Micah Kuiper (Hawk Nelson). Then came a Christmas single, "The Greatest Love (Once In Royal David's City)", and now Tori is back with "Revival", distributed by The Fuel Music.

Speaking about her short but effective career in music Tori said, "I always have had a love for music and singing and when I was 11 I began to write song.But it wasn't until a little bit later I realised just how much a song can impact someone. When I realised that the music I write could change someone's life, that's when I knew that I wanted this to be more than a hobby."