Trace Balin: The US singer with a bluesy new album

After three classy but anonymous albums for Word, US singer TRACE BALIN has come storming back with a brilliant blues-based album. She spoke to Jan Willem Vink. 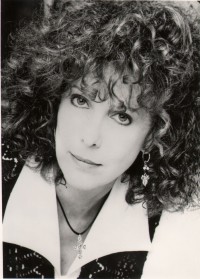 These songs are screamed and whispered from my heart," says American singer Trace Balin about her new album, 'Glory Road'. This album marks the beginning of a fresh move in Balin's career. It is the first album after ending a three-album contract with Word Records. But above all, the album's significance is because of the radical move stylistically; it's tough, searing gospel-blues Trace Balin is performing on 'Glory Road', ft's already gained some rave reviews. It also shines with the confidence of an artist who has finally found her stylistic niche.

Trace grew up in a non-Christian home. The liberal ideas of her father were a major push into music. "My father is a history professor, he's retired right now," says Trace. "My parents are divorced. My father taught me to express myself, to be anything you would like to be, all the way from an astronaut to the president of the United States if you will. Basically, to be self-sustained, self-supportive and independent. Thank you Ronald Reagan!"

When Trace was very young, she got her musical inspiration from the R&B of the Motown sound. By the age of 15, Trace was a professional singer performing in bars, under the protective eyes of her mother. This quickly led to a recording contract with Mercury Records that same year. That was the beginning of a path that led to being signed to CBS and ABC Records, as well as adding her talents to everything from Freddy Fender albums to Coca-Cola commercials.

After moving to Ohio, Trace met her husband-to-be Joel. They toured with a show group with dancers and singers for quite a while. "We toured like that for three years and then we settled in Orlando Florida in 1980."

Their move to Orlando was mainly an economical one. With Disney World located there, Orlando provided lots of opportunities for musicians. It was there Trace had her first encounter with contemporary Christian music, one that would have a profound effect on her.

Seeing Phil Keaggy perform in a local bar was a rare experience for Trace, since she noticed something different about both Phil and the crowd. She was especially touched by the Keith Green classic "Your Love Broke Through" and added it to her own repertoire.

"We didn't even understand the impact of the power of the music that we were listening to," comments Trace. "So we learned a couple of Phil Keaggy songs and went on with our business."

But the message contained in their new songs began to take effect. A transformation started to take place in Joel's life. In 1980 Joel started studying the Bible and was especially touched by the book of Revelation and how it lined up with world events. Comments Trace: "He brought it home to me in this big, long computer printout that he and a friend had , done. I was sceptical."

Joel accepted Jesus Christ. He invited his wife to come along to Hal Lindsey's movie 'The Late Great Planet Earth'. Recounts Trace: "I went to the movie and walked out a believer. We asked the Lord to put us in a place where we could be in an environment that had a family atmosphere, so went to Seaworld and worked there for five years. It was a wonderful time, it's a tourist park. While we were playing for families the Lord impressed on Joel's heart that we should have a music ministry."

However, after this time, Trace was about to give up music. Joel and Trace had adopted two children from Korea and she thought of becoming a mother full time. After battling with cancer, Trace developed pneumonia that went undiagnosed for seven months. Because of that Trace got the rasp in her voice that made it so significant and eventually led her to a recording contract with Word Records.

Says Trace: "It was a strange odyssey for me, because I really felt that I wasn't going to sing any more. I had this rasp, I couldn't get it out of my voice and that was the thing that perked the record company to sign me. The one thing that was my weakest character trait was this damaged voice and I thought the Lord was taking it away. But there's a scripture in I Cor 1:26 that says, 'He purposely chooses the weak and the lowly to shame the wisdom of the world, so that no man may boast in himself but can only boast in the Lord.' So I'm living proof that he can take something that's weak and has no strength at all and I can boast that he has done it, 'cause there's no way that I could have managed to orchestrate all of this and come to this point where I could fly thousands of miles and be able to sing for people in Holland. That's just extraordinary to me."

The family oriented nature of Trace's work in Seaworld is still a main focus of her ministry. "I've always wanted it to be where parents could bring their kids to a concert and parents would stay so they could share in an experience. We read books to our son that we don't really particularly care for, but he loves them. Because we spend time together and there's a bonding that goes on there, it's a special time and he's drawn to us and we in turn are drawn to him. Well, that's the way I like it to be in a concert, that we cross generational lines."

Yet most of her work is done before youth, because that's the group that buys her albums. "I've come to recognise that we must save the next generation, we've already lost one. Charles Colson says that no civilisation has survived, they've survived the loss of one, but no civilisation has survived the loss of two. And I recognise we've got to pour into our youth if we want to pull or pour out and do great things for Jesus before he comes because the world, we're destroying ourselves. Our youth is our only hope."

Trace Balin recorded three albums for Word, 'Champions', 'Here And Now' and 'Out Of The Blue'. Those were records that gave her a place on the CCM market, but did not give her the extra that would give her the push to make it to the top of the CCM charts.

Since Trace released her third album for Word, 'Out Of The Blue', she has become really active in the pro-life movement. "I go around and speak often times and sing to raise funds or money for crisis pregnancy centres here in the United States. It's quite a work, it's very pro-life, but it does require a lot of money. And so I go in and I sing and I do motivational speaking to help people understand this particular ministry and to catch a vision for this ministry." This work bears special significance for Trace, because she is a mother of adopted children. "Understanding that adoption is a viable option to abortion, just as is suggesting that they keep the baby all together. So that's a ministry I'm actively involved in."

'Glory Road', Trace's fourth album, came about after a tour in Holland. "I came over to the Netherlands last year and did a tour with Larry Howard, Darrell Mansfield and Glenn Kaiser. I wanted to experience first hand how I would be received. I did step out, I did take liberties to do blues materials or hints of blues on the 'Out Of The Blue' album. That was a pretty brave step here in the United States. Don Francisco had said, 'Well, if you put blues on your album it may well be the kiss of death. Conservative churches kind of frown on it, let's put it that way.' I have always had a desire to sing it. I believe what you're seeing is an evolution in what I have already been doing, a growth process. And just another form of expression of the undeserved gifting the Lord has given me. So, it seems like a natural process for me to enter into this and when I talked to Spark Records, we decided to collaborate and to do this album that I'm very excited about. I've collaborated with my husband Joel and various other writers to bring together a very cohesive album that I'm extremely excited about."

Though cohesive when it comes to style, 'Glory Road' is diverse in subject matter. "For the album I wrote about a myriad of topics," explains Trace. "I've written a couple of songs about faith, about going through life and not having questions answered. I know we live in a fallen world and some people are given over to their depravity, but why Lord? This is depressing! This is the blues! So I've written about asking the Lord questions.

"I wrote another song that's called "Faith Is A Travelling Thing", it's one of my favourite songs on the album. I realise that faith isn't just something, when you get up in the morning, it's not a blanket on your bed, then you just leave it on the bed and you get up and go away and you do your daily work. You take your faith with you, everywhere you go.

You wear it like a coat. "Glory Road" is about temptation, being pulled from left to right, trying not to make choices that are wrong, being seduced by the world, being tempted by the world, being tempted by the evil one to make wrong decisions. I also wrote a song about my son, Robby, it's called "Daddy Betcha Know". My son is a great prayer warrior and listening in on his prayers is incredible. So I wrote about that experience one night, listening to him talk to the Lord about the sins that he had committed during the day and his asking for forgiveness. It inspired me to write a song about it."

"'Glory Road' is over all a reflection of daily life. Just getting through the day and all the different things that we face."

I first became acquainted with Trace Balin thru a CD that Larry, Darrell and Glenn put in my hands. Her voice was so different. I fell in love with that voice on the spot. I could not get additional notes on her however. Therefore nobody gets to borrow my CD, ever. Keep up the great work Trace and may grace and mercy follow you and your family to the end of time.