Tree: The roots of the South African band 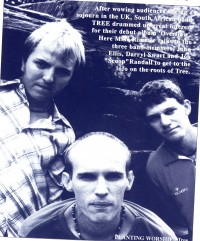 There's no doubt that Tree had a good time in the UK. All the members of the band seem to be flooded out with good memories of their visit. The wonderfully named bassist Scoop explains, "Our England tour in the summer was the first major overseas tour that we've done by ourselves. So it was a very significant time for us. It was also the first Christian festivals of that size that we've experienced." The band's singer John continues, "I'll never forget the overwhelmingly positive response we received. We played three songs on the main stage on the first night of Soul Survivor A. It could have gone either way. We were quite prepared for a warm response, but it just exploded! What a welcome! Greenbelt was a different scene. We were so excited about playing at a festival that U2 had played at 17 years earlier! No, seriously, Greenbelt was Greatbelt! For me, playing with Matt Redman was a huge highlight and I'm so grateful for the opportunity to have done that."

Aside from playing John confesses, "We are also fans ourselves, so meeting the Delirious? guys was exciting, as well as meeting Andy Hawthorne and the Tribe. We were so happy to get some sun as well!" He laughs, "The big joke when we came home was that we had been to England and got tanned! We did a lot of sightseeing and did some interesting experiments to see how far one pound could stretch. Between the festivals we were in London most of the time doing the usual Buckingham Palace, Abbey Road Studios tourist things."

While the band were considering their acquaintance with some of Britain's more historical places, perhaps some history lessons are in order. Darryl fills me in, "We got together in December 1996 after John gave me a call to help out with an album project that he was planning on producing for someone else. We had both recently become Christians and John had initially contacted me once he had heard of my conversion to encourage me and to invite me out so that we could share with each other what God had done in each of our lives. We all came from secular musical backgrounds and so knew each other but just as acquaintances. We never had any intention of being in a band together. In fact, we had both given up playing altogether, convinced that God had other plans for each of our lives."

Darryl continues getting to the root of Tree, "Scoop and John had been in a band together before they became Christians but the band split up when John got saved. I met Scoop one night when John invited me out to go and watch a band Scoop was sessioning in. We all got talking and John said that he had some songs that he had written that he wanted to try with a band. We decided to rehearse for a while just for fun and before we knew it, we were asked to play in a small Christian festival on the Durban beachfront. We played the gig, a week after our first rehearsal, and received a hugely positive response. We were then offered a gig in a club in Durban and did it with the intention of never playing again afterwards. But God had other plans and here we are today!"

Tree's vision works at a number of levels but it is clear that the band members are uncompromising in seeing that vision through. John shares, "The overall direction of the band is to first and foremost worship God with the talents and creative abilities he has given us. Everything else comes from there; he has blessed us with an ability to play music and not to do so would be ungrateful! I personally had no plans or desires to play in a band situation after I got saved but after starting this, God began to reveal to me the significance of music and the power of being creative as a form of worship. To me, music is 100% about God, or at least it should be. Tree doesn't exist to entertain, to compete with other musicians for popularity, or to reap material things (although those things do exist, it's the nature of this thing!), it's about worship, leading others into worship and, increasingly, about warfare. The Devil has used popular music for a long time, so what better way to defeat him than to turn it on him! Tree will last as long as God intends it to -obviously we'll seek to make good records and being the kind of people we are, to push the music into new areas, but if that's done for any other reason than God's, it'll be pointless."

All bands go through significant changes when they are first starting. Scoop explains some of the ways things have changed, "Looking back to when we first started Tree, it feels like a different life. Everything was much simpler. We weren't full time into it and we were playing small gigs using simple equipment. Now things have become a lot more complicated. In these two years our vision for our ministry has become very clear, all for God and to further his kingdom and we find that the longer we do this, the more effective we are. Musically, the changes have been less drastic but definitely there. We have moved from commercial secular music to more alternative Christian material such as Miss Angie and Christine Glass for spiritual as well as musical reasons. The spirituality behind these artists have influenced our new material, especially the lyrics."

Listening to 'Overflow', I'm struck by the hybrid of worship and performance rock, so I wondered where the band placed themselves? Darryl responds, "Ultimately our aim is to encourage people to get closer to God through our music, so it is worship, as far as we are concerned, but from a musical perspective we do seem to attract non-Christians as well. So we don't intend to fit into any specific style and don't believe God wants us to either. If you want to categorize the music it is probably 'rock' but we honestly don't try and write 'rock' songs, it's just the way that God intends the songs to be."

John continues and honestly states, "The term 'CCM' has some fairly unattractive connotations - to me it says 'American, contrived, schmaltzy'. I know that's a big generalization but for the most part, it's unfortunately true. We really don't fit into the 'rock band singing vaguely about Jesus without actually mentioning his name' category. We've always wanted to be blatant about our faith and sing directly to God. Musically we draw a lot from the guys who have set new standards (U2, The Police, etc), guys who have in some way redefined what it means to be in a drums/bass/guitar band. If we can use those influences to worship God blatantly and unashamedly, what a great thing!"

Those blatant songs powerfully connect with audiences both musically and spiritually. John Ellis is the band's main songwriter and I ask him about writing "Glitter". He responds, "It's the first song of hope I wrote after I got radically saved after an emotional breakdown at the end of 1995. I reached out to God for help and began to experience the hope of salvation and this song came out. The first positive thing I ever wrote! Interestingly, it's intrinsically evangelical - kind of the nature of being saved: you meet Jesus and immediately you want to tell other people, not to close their eyes."

Another favourite is "Worldwide" which came together as the band were warming up before a rehearsal. John remembers, "We were just jamming and came up with what sounded like a good idea. We recorded a demo of it just to reference it for ourselves and to get some ideas for a song. But the demo ended up being the final song. Not one thing changed. We were calling out chords to each other while we were recording it because it wasn't a full song at the time and we were coming up with ideas as we played. It felt like we were a cover band playing God's songs, which is actually how we like to see ourselves."

Hmmmm, in these days of cover bands Tree could be a God tribute band! Certainly they have a knack of drawing people closer to God through their music and live performances. When I first heard the band, the song "Joy" was the first thing to grab me. John reports that it was "written on a beach in literally two seconds flat as a kind of afterthought really. It's become Tree's trumpet-call in a way, at least for this phase in our development. Great for jumping up and down to and lyrically it just proclaims God's complete and utter victory over our lives."

The Christian music scene in South Africa seems to be slowly developing and at the forefront are MIC and Tree. Darryl observes, "Musically, we seem to still be attracting a lot of radio interest, both in the secular scene and Christian scene. MIC are great guys and have really helped and encouraged us." John chips in his thoughts saying, "There isn't much of a South African CCM scene. There's a huge groundswell of support and God has done and is in the process of doing some powerful stuff among the youth in South Africa. Kids are hungry for God but they want their faith to be expressed and framed by something relevant to them and things they are dealing with - Keith Green just won't do it for them! So a lot of people are excited that a band like Tree can exist: familiar with popular forms (birthed in them actually) and yet positive, life affirming, optimistic, hopeful, joyous, Christ-centered, worship-orientated -everything that popular culture isn't! So we get a lot of support, especially from other Christian bands like MIC and Naked Lyric. These two bands and ourselves are getting nationwide secular radio play, simply because despite the lyrics, the music stands up by itself."

Uncompromising and definitely being used by God at home, John has the final word, "We can go into a nightclub and give it stick and raving drug users come up to us and say 'cool band!' or 'good music!' We're just sewing seeds everywhere we go! The miraculous thing is that even secular concert promoters and program compilers want to book the bands because the standard is so high. God will use that!"

For more on Tree visit the Tree artist profile