The Cross Rhythms Festival 2003, to be held on 18th to 20th July, has a very special theme this year, Gideon's Heart. Here six participants at the event give their thoughts about the emotive title.

Gideon - reluctant hero. Gideon gives me hope. Full of self-doubt and anxiety, he hears God clearly calling him to take action. It's the last thing he wanted. Being so young and from such an insignificant town surely no one would take him seriously? But God has a plan and eventually Gideon gets involved. He is remembered for his heroic exploits. God is looking for a new generation of reluctant heroes - those who share Gideon's heart. The Cross Rhythms festival will be a place where many will hear the call to demonstrate faith works.

For me, the phrase "Gideon's heart" speaks of two things -potential and courage. When the angel appeared to Gideon under the oak tree, he found a lad so scared of his enemies that he wouldn't even go to work in the usual place, just in case they found him. Yet the angel calls him a "mighty warrior"! Go figure. People can only see what we look like, but God sees what really counts -on the inside. That's what potential is all about. Then there's courage. Can you imagine what it must've been like for Gideon and his tiny army, up against a myriad of his enemies? It'd be like you and your mates hopping into a tank and taking on the entire Iraq War all by yourselves. And nowadays, we ARE in that kind of a battle, but ours is unseen. It happens when our culture, media and unsaved friends tell us that sin isn't sin and that it's normal to do things that contradict God's way. Don't believe the rubbish. Be a Gideon.

The phrase "Gideon's heart" has been causing me some problems. To me it means that even though Gideon had trouble believing God would use him, his heart was still focused on him. The trouble I'm having is in the challenge. Gideon let God strip away all his security, and in fact God couldn't use him fully until he did! That isn't a comfortable place to be in, and that's the challenge, will I let God that close to me?!?

I was contemplating the story of Gideon's Army recently. There was the original army of 32,000, the smaller gathering of 10,000, who at least didn't tremble at the prospect of battle, and finally the 300 who were God's selected strike force and got to carry out his amazing battle strategy. To me that 32,000 is a pretty good representation of all the Christians in this nation. Rather a motley army maybe, but in a profoundly secular culture at least they won't bow the knee to Baal. Through faith in Jesus this army have found comfort for their souls. The problem is that many of them do little or nothing with their faith. Many in their ranks attend church, listen to sermons, maybe even buy a Matt Redman album. But they remain moribund and spiritually inert. When encountering exhortations to engage in evangelism, feed the poor or, most worrying of all, do more signs and wonders than Jesus did, this mass of Christians will find a thousand excuses, cultural and theological, as to why they shouldn't move from their inert state. In fact, they are simply afraid, afraid of making a fool of themselves, afraid of engaging in a spiritual battle full of potential pain. So, like in the Gideon story, God tells this trembling mass that their fear disqualifies them from a forthcoming spiritual battle.

But that still leaves the 10,000. These aren't afraid. Back in Gideon's day they had swords and wore armour. Today they have NIVs and read the spiritual warfare books, go to the latest seminars and sing a host of victory songs in their churches. These modern zealots talk incessantly about revival, longing for the day when God sweeps in power across the land. They can't wait to get out there and do spiritual exploits for the King. But they don't have God's strategy and down the last few decades their efforts -
evangelistic initiatives, praise conferences, training weeks Ã have not heralded in revival but seen a steady and relentless numerical decline of the Church in Britain.

It seems to me that God is now calling this army to the water to drink. Through worship and prayer and the ministry of the prophets God's strategy will be revealed. This revelation won't be for everyone who prays in tongues or sings "Be Bold Be Strong" or attends a pray-for-revival meeting. Maybe, like at the time of Gideon, it will be a small minority of the throng who are called into the frontline where the demons are defeated and the armies of secularism, witchcraft and lust are pushed back from the land they now inhabit. But I believe some of the people who go to Cross Rhythms Festival: Gideon's Heart and drink from the living water which will be available there will be called and equipped for the battle to come. And that is a very, very exciting prospect.

At this time, I believe God is raising up a new breed of prophet musicians, with a heart for the Kingdom. Mighty men and women of valour, with a willingness to turn faith into action, taken from the winepress of fear and failure, with hearts of humility. although small in number, yet glorifying God, and through his divine process made perfect in the heart. They are being called to be his mighty deliverers - "for such a time as this." 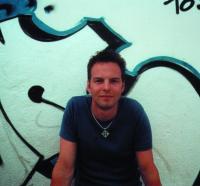 I love Gideon because he reminds me of the guy I meet in the mirror. This was no lion heart. He had the heart of a chicken, the charisma of an earthworm. If he were around today he'd be understudying for the guy in the Mr Muscle ads. That's why God chooses him as a "Mighty Warrior"! In the Church today there are too many pedestals getting polished. Too many superheroes getting in the way of God. But he chooses and uses wimps, failures, sinners. That's how a donkey like me gets handed the microphone at a thing like Cross Rhythms. In the words of the 24-7 Vision: "Summon the losers, herald the weirdos and the freaks." Do you qualify?