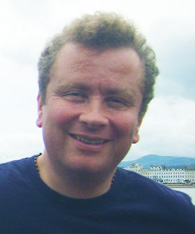 I slowed down and stopped, indicating to turn right on the quiet, main road and waited for the one vehicle of on-coming traffic to go past me, before turning right - when it happened.

Despite clearly indicating to turn, despite there being hardly any other cars on the road, the speeding vehicle travelling behind me failed to read the situation and went BANG into the back of me! This was April 2020 and the first few weeks of the government lockdown. I was driving across Merseyside, going to a particular pharmacy to collect the monthly medicine of a member of my church, before driving on to where he was re-cooperating, following an illness not related to Covid-19. As a Baptist Minister, I was working as a key worker, although not a front-line key worker, during the lockdown.

I did wonder if the crash was the result of some spiritual attack. Later, when I parked at the pharmacy, life became even more surreal. Still shaken, I walked into the chemist where I was met with a great deal of signage, and where only two customers were allowed in, at one time. I felt I had stepped onto the set of a science fiction film. Since my last visit on his behalf, the Personal Protective Equipment for the staff had been stepped-up and I now faced - behind full-length protective screens - counter-staff wearing full, plastic face-visors, gloves and protective gowns. It was a relief to be asked familiar questions about the date-of-birth of the patient and their temporary address, by someone who looked like a space-trooper. Wearing a biker's jacket and ripped jeans, I confirmed to the lady serving me, that I was indeed a Baptist Minister, collecting medicine on behalf of a church member. I had printed identification with me, ready to produce, but she believed me.

Many people have reacted in different ways, to the restrictions imposed by the government lockdown, which first began on 16th March. At the outset, I tried to read that particular situation and resolved to try to support the whole congregation - as well as a few of those outside - by telephone, e-mail, text message and by letter.

This quickly led to my regularly collecting medicine on behalf of several people 'shielding', as well as doing food-shopping for others, all whilst following guidelines on social-distancing. Thanks to the enthusiasm and concern of a church member, the church began distributing vital food-parcels in the area and, at the moment, distribute them to 35 needy households on a weekly basis.

This has, in turn, led to my befriending and supporting several people with suicidal tendencies. One Sunday lunchtime, I spent almost an hour on the 'phone, with one lady, persuading her that she had sufficient reasons to carry on living. Oh, and going to the local police station with another person to report how they had been a victim of a telephone scam, from a number in Clacton, preying on pandemic paranoia. It was a real answer to prayer when later the bank at this end informed us that they had been successful in retrieving all the monies when the receiving bank in India agreed that they had been obtained by false-pretences and was similar to other transactions, which they had detected.

Having to stay at home for weeks has affected everyone, and I know of many who have gone a bit 'stir-crazy', through not going any further than the garden-gate. One church leader, in the region, told me that he was taking the opportunity to catch up on reading, opening Theology books on his shelves which hadn't been touched in 30 years. When asked about his congregation, he replied, "Oh, they're alright - they're all praying for one another. They don't need me, at the moment."

He's got a point. I wonder how many of us aren't half as important as we think we are.

In these unprecedented times, I've spent a lot more time in prayer. In trying to read the present situation, I wonder if the best thing that we could all do is spend more time with our Heavenly Father in this enforced period of rest. I wonder what He wants to say to us about the future...