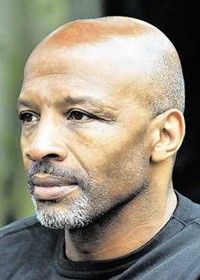 For 20 years Cyrille Regis had been asked to tell his life story, but it was only last year that he finally felt the time was right. Cyrille Regis: My Story, covers his development as a footballer through to an MBE and discovering faith. Tony Cummings caught up with Cyrille and author Chris Green to share in his favourite football moments and hear what it was like to pioneer the way for the black players of today.

Tony: What was it that made you want to tell your life story?

Cyrille: I've been asked to tell my life story since my late 30's; since I packed in. Various people have asked me to do an autobiography defending my football career. I didn't want the normal kind of football story and information side of football though and I felt that I was still a bit immature and young.

I reached 50, got my MBE and just felt 50 was a real time of reflection and looking at my life. I've known Chris for a long time and he suggested about doing an autobiography. It felt right and I could now look back at my life with a little more clarity, a bit more maturity and I just felt that it was a great time.

Tony: Chris, Cyril is well known as a Christian as well as a footballer, did you struggle with the writing of the book, not to put in too much about his faith, so that it would appeal to non-Christian readers?

Chris: I think as far as I was concerned it was important that people understood how Cyril had got around to being a Christian and how he got to the point in his life where he felt the timing of the book was right. It was more of a life story rather than just the football element of his life. It's a tale of overcoming many difficulties throughout his life, but also some real career highs and the kind of dips that we all have. For me as an author it was a matter of getting the entire balance of that life correct. I think we perhaps edged towards the Christianity, more the spirit and ethos of it, much more towards the end. I think that the great thing about the book, as far as I am concerned is that it's a real full life story.

Tony: Cyril, when we look at the leading football clubs today, they're awash with black players. Back when you were playing, black players were a tiny minority. How much do you think you personally played in changing that situation?

Cyrille: I think myself and others made a massive impact in the way football is now. As you said, every football club has got a number of black players; sometimes more than 50-60% and it's great. Now you see black players as who they are - just players, rather than the confusion of all the myths and barrier we had in the past, like a black player can't play in the cold weather. Myself, Laurie Cunningham, Brendon Batson, Justin Fashanu and large numbers of others helped break those barriers down. I've got to mention the managers as well - Ron Atkinson, Jonny Giles, John Barwell, David Plea, Graham Taylor; they were around the same time, which was giving black guys a chance. I felt that we made a massive difference in terms of the thinking of the next generation.

Tony: You became a born again Christian following Laurie Cunningham's tragic death. Why was it that particular event which led you to think more deeply about faith?

Cyrille: I think it was the final event. We had been brought up Catholic and known about God. I look back on my life and God's been knocking on my heart for years before that. There was that event and also other difficulties in my life.

When Laurie died, the major thing for me was that I thought I was very successful, in what is termed worldly successful; I had the money, the car, the fame. What hit me like a sledgehammer is that my friend, whose life was very parallel to mine, he died in a car crash and he left everything behind. I could have died two years before in a car crash. To me it was a massive question - wow if I had died I'd have left everything behind, so what's the most important thing to Cyril Regis? What can I take? It was through those questions in my heart and my mind that I needed answers. Coming from a Catholic background I knew about God and my natural sense was to seek and ask was there a God and to try to find those answers.

Tony: You mentioned earlier that you've had a chance to reflect over your whole career. I know it's a very difficult thing to ask, but is there one particular vivid football memory - one goal you scored or something that happened on the pitch, which always comes to your mind when people ask you the obvious question, what's your best memory? 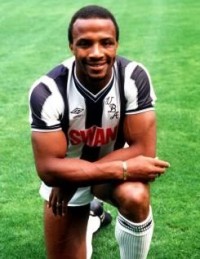 Cyrille: Well I think there are two things. Obviously one is the FA cup final, Coventry verses Tottenham in 1987, which was a classic game. It was great to play in that game with my team mates, the team spirit we had was fantastic and beating Tottenham at Wembley in front of 98,000 fans was great. I mean not many people in the game actually get anywhere near a cup final or any of the rewards of a cup final. To get one with a club like Coventry was absolutely fantastic.

Another game people talk to me about was the 5-3 Christmas game. It's a signature game that showed the Albion at the time; the flair, the passion and the aggression that's needed to play football. Those two games stand out a mile.

I've just got this book via my public library not knowing any thing about Cyril Regis's faith and not started reading yet - And I read this article and I think wow what a God incidence. Let you know what I think once i've read it.

bless you,cyril regis! now all we need is for laurie cunningham to come!