Tony Cummings recounts his ongoing involvement with the suffering of Sudan 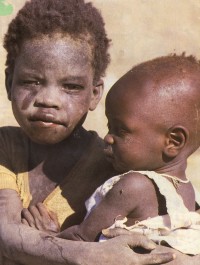 "Like cold water to a weary soul is good news from a distant land" Proverbs 25:25
We touched down on the airport runway. Shortly, I would enter Sudan's capital, Khartoum, in the north of the country, only to find myself in precisely the same position as dozens of journalists, doctors and famine relief workers who nightly crowded the capital's hotels - separated from the suffering by a siege. I inevitably asked myself, What on earth am I doing here? Why indeed? I may not have fully realised it, but I was standing on the verge of a remarkable adventure - one of the defining periods of my life. But for now, what was I doing there, so far from home? It was 1986. I was happy and I was unhappy. I had an exciting and fulfilling job. I was, from time to time, clearly hearing the voice of God. I had a happy marriage. I had a family. Yet I was also unhappy, because there were things in the evangelical subculture which I found unacceptable. I'd made a few...I won't say enemies, but there were some people who weren't exactly helping me, too much - and I had the feeling that I'd soon be fired from Buzz magazine, the national Christian publication for whom I worked.

So I was praying, trying to work through some things in my mind. One evening I came home from a church meeting. My wife Maxine had gone to bed. I was tired, but as was my habit, I decided to watch the news before I turned in. I switched on the TV and there was a small story, about thirty seconds long, about war and famine in Sudan. This was over a year after Live Aid and journalists were starting to talk of 'famine fatigue' and 'compassion fatigue' in the West. Famine in Africa had been a big news story. Millions of people had given to suffering Africans. But apparently for most their compassion had waned.

I watched the short news item about Sudan. I've always had a poor knowledge of geography and I only just about knew that Sudan was in Africa. I knew little else about it. There was a famine growing in the south of the country, due to the civil war there. The aid agencies were complaining they were being blocked by the Sudanese government. But as soon as the newsreader began speaking about it, I felt the Holy Spirit. It was enough to make me cry. I still feel it, every time I recall it. I heard the words "Go to Sudan."

I went to bed and told Maxine. The next morning I went to work and told Buzz's editor, Steve Goddard, how I believed God had told me to go to Sudan. I'd told him something similar once before, when it was "Go to Accrington" and write about the drug abuse up there. I ended up in a drug dealer's house where I led a girl to Christ. So perhaps because of that Steve was inclined to believe this fresh revelation when I said I had to "Go to Sudan." Steve said he'd help and got some cash together for me to go. He spoke to his bosses at Elm House Publishers and came back, saying he could offer a small amount in expenses. Even in 1986, it wasn't enough to get me to Sudan, but it was a start.

I phoned an aid agency, World Vision. They were big in America but not in the UK at that time. Following a long conversation, they agreed to arrange the flight. The deal was, I would be flown to neighbouring Ethiopia, write about their work there (they'd been very involved with the Band Aid Trust, setting up feeding camps and basically keeping people alive) and I'd then be flown into Khartoum, where they had about one man and his dog...the political situation was virtually impossible. They would put me up in a modest hotel for a few days, before my flight home. I'd be on my own, in the mean time.

So here I found myself in Khartoum. It was deranged. Public beheadings where thousands gathered for entertainment. A 'jihad' declared against the Christians and animists in the south. And in the south ragbag armies fighting the government with raiding parties going out and capturing children to fight in the armies. Also, slavery was rife in the south. It was difficult to get concrete information, but one story repeated to me several times was that church pastors had been captured and crucified by government forces.

An American photographer, Steve Reynolds, picked me up from the airport and explained all this. I gathered that he was also employed by World Vision, but was due to pull out soon. Like the other westerners, he was frustrated that atrocities were happening in the south, but nobody from the rest of the world was allowed there. Entry was blocked by the government. All the major aid agencies had a presence in Sudan but their movements were utterly restricted, so the agency personnel were in the main staying in Khartoum's Hilton Hotel, where they were cowed by the threat of expulsion from Sudan if they were caught 'interfering'.

Steve took me to my flea-bag hotel. Having found a pilot crazy enough to fly me, with no authorisation, into the southern war zone, I telegrammed Buzz asking for more money so I could investigate for myself. But Buzz refused any further payment. I was broken-hearted. "Why am I here, Lord?" It was a question I repeatedly asked during my first two days in Khartoum.

Then at the Hilton a black man appeared amongst the white guests and the Arab staff. This man was simply going up to the agency people asking for donations of bandages, medicine, money. My photographer friend explained, "There's John Gai - he's a one-man charity! He's brilliant; he's helping the Bentius." John eventually enquired who I was. I explained I was a journalist with a Christian magazine. John then told me about the plight of his people.

By the time of my first visit Sudan was almost completely divided into two: the relatively stable north and the war-zone of the south. With the exception of a few flights going out with food to the southern town of Juba, the region was effectively cut-off from all external help.

"There is clearly famine and suffering in southern Sudan," confirmed Steve Reynolds, doubling up as communications manager for World Vision in the country, "...but with the border closed it's impossible to get reliable information. We get one report saying that people are dying on the streets of Waw [southern town at the centre of the fighting] and another report that the harvest of sorghum [local wheat crop] has been good." Steve was later to prove invaluable to me - his photography illustrating the cover article Rubbish Dump Kids in the February 1987 issue of Buzz which drew attention to their plight. 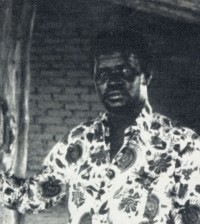 John Gai (pronounced 'Guy') was becoming increasingly frustrated with aid organisations (many of them Christian) and their seeming inability to help 8,000 desperately needy Bentiu people who had come to Khartoum and settled on four rubbish dumps on the capital's outskirts. John Gai was a burly six-footer with skin of darkest ebony. He was leading a lone campaign to help the Bentiu people, the largest tribe represented among the impoverished 'rubbish dump people'. In escaping the fighting the Bentius had endured some unspeakable suffering and alongside some appalling stories was the harrowing fact that half of their children had died on the trek northwards along the edge of the Sahara. Now, having escaped the war-zone, the sanctuary for these and other refugees had become their prison. They were from the 'Christian' south - the Islamic north was openly hostile to them. At best, their presence was viewed as an embarrassment to the authorities.

With Steve Reynolds I arranged for John Gai to take me to the Hila Shok rubbish dump. There I spoke to people living in these desperate conditions." Four times the authorities have come and burnt our camps", a mother explained to me as she leant against the sacking and cardboard hut which constituted her home, "...and every week, the police take away any valuable things they find here and beat up anybody who resists." Surrounding us were mountains of refuse - human waste, old rags, car tyres, rusty cans. A modern-day Golgotha. A barren place; a rotting, festering waste dump; the only interruption to the red dust wasteland's desert flatness. Home now to many men, women and children.

"The international aid organisations," John Gai explained, "need to keep on the right side of government. The government of Sudan sees these refugees, and their camps, as something best destroyed and don't want anybody to help them. So the aid organisations have been able to do very little to help the worst of these people's sufferings."

I am delighted to see you still writing and sharing your passion for people in the UK and around the world. I remember well those "hot" days in Khartoum well. I know that God has a good plan for Sudan, and i pray that I will see it come to pass. Blessings.

It was great to meet up with you again at Greenbelt, Tony - and exciting to hear of how you continue to care for a forgotten people. All power to the vending machines!

I have heard you tell this story in person, but reading it has somehow made it even more poignient! Debby and I are making a small contribution to Agents of Grace today. May God bless you in this ongoing endeavour and may EVERYONE who reads this article feel moved by God to make a contribution!