Twenty One Pilots: Vinyl only release of new live album 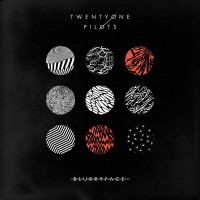 On 25th November Twenty One Pilots released 'Blurryface Live' and have issued it solely as a three LP, tri-gatefold record. 'Blurryface Live' was recorded at the duo's Fox Theater, Oakland appearance during their Emotional Roadshow World Tour. Each LP is a black and red picture disc, featuring images of the duo in action.

As Josh Dun's and Tyler Joseph's phenomenal popularity continues to grow, the band have announced they will be airing their new concert film Blurryface Live on US TV channel Palladia on 1st January 2017. Britain's Kerrang! magazine recently ran an article - 12 Reasons Twenty One Pilots Are Taking Over The World.

In an article on the Godreports website Michael Ashcraft and Mark Ellis wrote about the duo: "Their angst-riddled lyrics are resonating with Gen-Y'ers and Gen-Z'ers, showing them a way to hope and faith. While 'Stressed Out' is an innocuous ditty about young adults yearning for the carefree days of childhood, other songs on their two albums - 'Vessel' and 'Blurryface' - pack plenty of gospel punch. The duo signed with a secular label (Fueled by Ramen) and get played mostly on non-Christian radio. But make no mistake. Though subtle at times, they are unequivocally Christian. . . and in 'Car Radio', the singer exposes how sinners deaden internal pain with meaningless lyrics put to a catchy tune. 'There are things we can do, but from the things that work there are only two. And from the two that we choose to do, peace will win and fear will lose,' Tyler sings. 'There's faith and there's sleep. We need to pick one please because faith is to be awake, and to be awake is for us to think, and for us to think is to be alive. And I will try with every rhyme to come across like I am dying to let you know you need to try to think.'"