Underoath: Metalcore hitmakers 'Lost In The Sound Of Separation'

The latest big hit for those Florida practitioners of metalcore mayhem, Underoath, (the band's 'Lost In The Sound Of Separation' entered Billboard's Top 200 album chart at number eight) continues to mystify industry observers who insist that you must have big radio or MTV support to generate the big sales. Recently Christianity Today asked the band's frontman Spencer Chamberlain why he thought Underoath could succeed with little or no airplay or MTV exposure. "A lot of bands rely on what's popular now - with videos and the whole radio push. Since we started as a band years and years ago, I think [we've] built a more honest fan base. We were always hanging out with the people on every tour you'd go to. Back in the day, we used to play a show and then announce from stage that we were going to Denny's to eat after the show, and that the whole audience could join us. It's a lot different for bands that do it that way as opposed to putting out a poppy record that blows up on radio [because it caters to a fad]."

This summer Underoath toured the US with bands like Disturbed and the notorious Slipknot. Christianity Today asked them how they could "reconcile touring with secular bands that don't stand for the same things?" Said Chamberlain, "We do it all the time. Very rarely are we on tour with a Christian band. Everyone on [that] tour is really good friends by now. There's this mindset that unbelievers are close-minded to believers [and vice versa]. But I wouldn't not hang out with you if you were an atheist any more than I would hang out with you if you were a Christian. It wouldn't matter to me. If you're a cool dude, you're a cool dude either way."

Guitarist Tim McTague took up the topic. "Honestly, I love the dudes from Slipknot. They've been nothing but nice to us and respectful. As far as their music goes, whether we like their music or not, does it really come into play? Just because we do music differently than they do, I don't think the way we do things should be forced on them. The fact that I view music and life and faith and beliefs differently than probably anyone on the tour for the most part, that shouldn't put up any roadblocks for me getting into their lives and being friends. That's one thing that we're really conscious about. I think Nickelback's music is the dumbest thing ever - I think they're the worst band ever. But if [Nickelback frontman] Chad Kroeger came in to chat, I wouldn't tell him, 'I can't hang out with you because I think your band sucks.'"

In all their live shows Underoath make a point of name-checking Jesus. Said Chamberlain, "I don't plan what I'm going to say. I make sure I say it in a respectful manner towards people, so they don't take it like I'm coming after them or that I'm smarter or better than them. That's not the case. I just like to share with people. I don't want people to think that because we believe in something that all Christians feel superior, or that we're going to judge you because you don't [share our beliefs]. That's probably the biggest thing I'm trying to prove wrong - the biggest damage of Christianity that I'm trying to repair. I'm like, 'The reason I tell you about this is because it helped me out. I'm going to share that with you because it really did make a big difference in my life. But it doesn't make me any better than anybody else. I'm not perfect and never ever will be. I screw up every day. But it's made my life that much better.' I feel it's more honest. It's not like telling you what to do, but just telling you what I do." 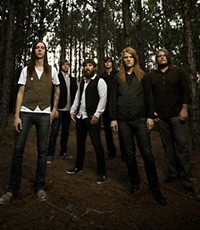 Chamberlain explained where the 'Lost In The Sound Of Separation' album title came from. "It's actually a lyric from a song. The whole story is all pretty much the last two years of my life. It could be interpreted as me trying to separate the things that I should be doing - what God is actually calling me to do - and the things that I actually do. As Christians, we fall all the time and do things that are selfish. We know what we're supposed to do, but can't always hear which voice in our heads is the right one and the wrong one. 'Lost In The Sound Of Separation' is trying to string out and differentiate all the different voices talking at the same time in our heads: the conscience of God, best friends, parents and anyone telling us [what do to and how to live]."

So how would McTague compare the album's style with previous releases? "The heavy parts are way heavier. The melodic parts are way more melodic. The lyrics have a lot of meaning. You can tell from the whole thing that we're still the same band and that we're coming from the same kind of place, but we've also gone in a direction that's harder and farther than anything we've ever done. I hope that's the way that people who listen to [the new album] see it."

The positive Christian message that clearly comes through in Underoath's songs is vitally important to the band. Said McTague, "The rock scene as we know it is kind of self-absorbed in and of itself. There's really no purpose in anything. The purpose of rock 'n' roll is being as careless and reckless as you possibly can. For me, I hope that our songs at least carry some sort of lasting purpose that is universally productive to society - not talking about how this chick is a certain way, or how I want to become a rock star or whatever those dumb bands talk about. It really hurts me and bothers me that bands like that have so much power and influence over the people that listen to them, yet they waste it with stupid, catchy lyrics that any 10-year-old could write. I think it's important to take that seriously and go, 'This is real stuff. You're a real human. I'm a real human. We're not here very long and we have to get somewhere positively, not in a negative way.' I hope that people hear us and see us and feel a sense of substance and purpose. I think that's what's missing in the music of the 21st century, and it's something that we're not willing to let go of."

McTague continued, "The cycle of our last record was probably the hardest of our career, but it was also one of the best. We've had all these great accomplishments and mountains that we never thought we'd see the top of, and then we also had some of the worst. We broke up for a month [after 'Define The Great Line']. The only reason why our band was able to make this new record was by the grace of God and his hand and purpose on us. Literally, we're just as dysfunctional people, if not more so, than anyone else on this planet. And I don't profess just because I'm a Christian to have it all figured out or that I'm better than anyone else. I really think that the day that God pulls his hand off our band that we'll just implode. I'm confident that every day we get up and make it through another day is a day that God intended us to be a band. The day that we break up is the very exact day that I know he's telling us, 'You've served your purpose. I'm done with you guys. Now go do something else.'"

underoath i am thankful for your firm conviction in your faith in the savior of this lost world. What a ministry you have and how as sheep we have all gone astray. Jesus sat atop that hill and weeped over jerusalem and said how many times would i have brought you to myself. No doubt the same Jesus lives inside of your hearts and the compassion is evident. I pray that God would bless you and your calling. Beware of bringing people back to right relationship that your feet don't slip on the slippery slope of addiction, alcoholism, womanizing, sti's, broken lives and broken relationships. Jesus was accused of eating and drinking with sinners. We all our sinners and I am so thankful for your views. Sometimes we spend so much time judging other people we forget to love them. Thank you for loving the masses. With the heart that you have for these people God will make your album sell if he so desires. My brother's best friend is in prison. He has a radio headset and listens to purple door radio wich is a christian radio program. It features music like yours and disciple and family force 5 and the like. I praise God for the work you are doing.

For one, he was just making a point, he wasnt picking on them, he was just saying he wasnt goin to exclude a person because he doesnt like their music...
two, Nickelback IS terrible. They represent everything that is wrong with rock today. They use a tired genre to push poorly written songs. PLUS, one of their more popular songs is essentially about sexual dominance.
I didnt think Irish people liked horrid American music
Ah well

Every band of which genre ever is totally different and I don't get it why some artist need to pick on Nickelback.

For more on Underoath visit the Underoath artist profile