Cross Rhythms likes to think that it has its finger on the pulse beat of the international world of Christian and gospel music. But sometimes it takes us a while to catch up and that is what has happened to the Australian pop dance trio VERSES. Now on the playlist is the wonderful dubstep-infused "Hold On" and having discovered their small but perfectly formed catalogue (three singles, one EP) there will soon be British followers to add to the enthusiastic fans the trio have already picked up in the USA, Germany and Mexico.

Brothers Luke and Joel O'Dea first grabbed the attention of a mass TV audience when, in 2010, they appeared on Australia's version of X Factor. Luke is quite candid about his and his brother's brush with the TV pop big time. He told Australia's Warcry website, "Sometime after X Factor we realised that we were trying to make our own 'dreams' come true and do everything to have success, in the end to the detriment of our relationship with God, each other and with music.

"So when I had the idea to make [VERSES] music I wanted to do it differently - to focus on making great songs rather than a great artist, and why limit this to just a guy or a girl singer? So I thought why not have both! Joel and [my wife] Jess are great worship leaders, singers and creatives. We weren't trying to realise our own dreams or success, but to do something where God could impact culture, people and individuals through music."

Luke and Joel had grown up with a strong Salvation Army connection. Said Joel, "Our grandparents were officers, our mum was an officer and now our parents oversee our church at Northlake's Salvos. Our first corps (church) was at Lambton Salvos, until we were part of the team with our mum and dad to establish the Northlake's Mission. So I guess you can say we have always been involved with the Salvos." 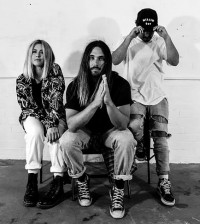 In 2017 the trio released the EP 'Chapter 1'. Said Jess Clayton O'Dea, "The EP is the collection of songs that birthed VERSES. When we started writing these tracks we did so with the intention of just giving it to our youth group and then being done with it. But God has shown that there is such a need for Scripture to be in people's lives that doors keep opening for us, which has led us to writing more songs, and God keeps making a way for us to share this with more people and so we keep saying 'yes'."

Their most recent release was a radically reimagined dance version of the Cory Asbury song "Reckless Love". Many of their songs, though, are effectively what they call "modern day memory verses." Their current Cross Rhythms radio hit is, in fact, based on Hebrews 10:22-23: "We hold on unswervingly to this hope we have, because he who promised is faithful."

For more on VERSES visit the VERSES artist profile