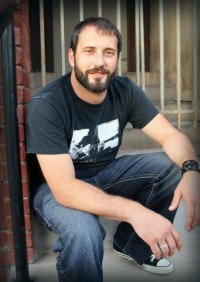 New independent record label St Muse have so far released two EPs, 'Helium Revisited' by singer/songwriter Vince Lichlyter and the eponymous project by husband-and-wife due The Love Amendment with a third one coming out at the end of April by a highly regarded rock name of yesteryear, Jonah33. As it turns out, there is a common denominator in all three projects - singer, composer and guitarist Vince Lichlyter. Seattle-born, Arkansas-based Vince has had his taste of rock music success. From 2002 to 2007 he was the frontman for hard rockers Jonah33. With band members Jason Ronney, Joshua Dougan and Cory Riley, Vince toured the US and Jonah33's albums 'Jonah33' (2003), 'The Strangest Day' (2005) and 'The Heart Of War' (2007) were well received. It was a surprise then when shortly after the release of 'The Heart Of War' Vince announced they were disbanding.

Explained Vince, "It wasn't necessarily problems with the band. When you've been in the public eye you have to come up with some sort of response to give the media, to give the public, to satisfy their questions. No one in the band, including myself, had any problems with dealing with truth - be it social injustice, hypocrisy, apathy - we felt was going on with the Church, but it became such a focal point for me. I focussed so much on the problems, I took my eyes off the answer: instead of pointing people to the answer, I started growing more angry and bitter about the problem. That bitterness started growing deeper within me. I just felt like Jonah33 had become something God didn't ordain. That's the gut-level truth: I took my eyes off the answer. At the end of the day, I felt like God pulled the plug on the situation."

After Vince came off the road he and his wife Amber started to raise a family. They now have five children. As Vince slowly regained his spiritual zeal he also began leading worship in a local church. Fast forward to 2012 and Vince, together with long-time manager and friend Caleb Morgan, began to plan the start of a new company, Boleyn Records/St Muse Records. The first product to come out of the alliance was Lichlyter's 'Helium Revisited' EP. Said Vince, "I have a collection of probably 200 songs; a lot of that stems from what I went through. I recorded 'Helium Revisited' in Houston, Texas, with a friend of mine we used to tour with back in Jonah33. He's got a studio set up in his house."

The first track on 'Helium Revisited' is "No Regrets", as catchy a piece of rock as has been released this year and has already been selected for the Cross Rhythms playlist. The second song, "Things I Need To Say", will surprise fans of the old Jonah33, being a winsome slice of Americana. Vince spoke about the origins of the song. "My wife was at work - she's a teacher - and all of the kids were running down the hallway or something; I was 'taking a break', locked myself in the room, picked up a guitar. I heard them playing outside and [this song] poured out, two or three hours. It sounds kind of dark, but if you're a parent you get what I mean. If I get taken out early, and this song is played at my funeral with my kiddos all sitting there listening - if I didn't have a chance to tell them, what would I want them to know from my heart to theirs, what would I say? That's what came out."

Down the years worship music has become something close to Vince's heart and the decision was made that he and Amber record a worship project together under the name The Love Amendment. Long-time friend and producer Kyle Simpson from Tulsa, Oklahoma, visited the Lichlyters and over a long weekend turned their home into a recording studio. Commented Amber, "It was a whirlwind. Kyle showed up super late one night, and by the next morning our living room was a full blown studio. Our hall coat closet became a vocal booth, and Vince tracked all the acoustic guitars in the bathroom. That's right. On the toilet! Combine that with juggling four kiddos and trying to keep them quiet while Vince and Kyle worked. . . Like I said, it was a whirlwind!"

Speaking about the songs on 'The Love Amendment' Vince explained, "Some of them are older, some of them are newer. There's the track 'Let Me Stand' - that song was probably the oldest. Right around the time that Jonah33 broke up I wrote that track. It's based off the story of Mephibosheth. King David goes looking for anybody left in the house of Jonathan that he can bless, and Mephibosheth is a beggar outside the city. That story is so awesome to me because that reflects who we are. That hit me like a ton of bricks. My pastor came up to me and said, 'I want you to write a song about this'."

Currently, Vince is putting the finishing touches to an EP of what will mark the return of Jonah33. He said, "The new Jonah33 is just going to be me and I hope to have the EP released by the end of April. 'Dead Man Walking' is a five-song EP. I've still got that rock and roll in my blood. It's typical Jonah33 in-your-face songs."

The music industry has changed hugely since Jonah33's heyday. Commented Vince, "My manager and I were just having that conversation the other day. Shows are not the same as they were 10 years ago: not a lot of people are bringing in concerts. A lot of churches don't bring shows in anymore, because the worship music - kind of like what Nirvana was to music in the '90s. There were so many good worship bands coming out in the 2000s that now churches don't bring in bands anymore because they have these amazing worship teams: they can play anything that they want to have them play. We've backed off booking shows right now and focussed on getting content out. If they want to have us come in, obviously we will. But we're really not pushing going out and playing the shows."

One thing Vince is continually being asked is, what is his calling? He asserted, "Obviously I can give the generic answer, 'I've been called to worship' or perform - however you want to play it. But my calling is, and has always been since I got saved when I was 19, to create music that would cause people to think about God in a manner differently than they have before, whether they're saved or lost. With Jonah33, for me it's always been about not necessarily causing a ruckus, or trying to shock people, but about taking things that people don't want to discuss and bring it out in the open: let's talk about it. 'Desensitized' off our second record, that song was about pornography. There's so much safety involved with Christianity today that it doesn't compel anybody. One of the reasons I gave my life to the Lord, it was so fascinating to me over all these religions in the world, there was one cat that stood out and said, 'I'm the way, the truth, and the life'. He was so exclusive about it that I thought, 'That dude's got something going on'. That exclusivity drew me. That becomes so offensive today in this world."

Warming to his subject Vince continued, "Everybody has been brainwashed by our culture to dislike the exclusive nature of Jesus' claims about himself. In fact, when I became a Christian I was attracted to that exclusivity. If you buy into it and your heart lines up with your head and you become a believer, it's just a given. Jonah33 for me was always an outlet to cause people to be offended. My dad was a retired Master Sergeant in the air force. He was an old gruff man who would walk up to you and punch you in the stomach, but then he'd hug you and he'd laugh and he'd walk away and say, 'It'll quit hurting when the pain's over' - just playing around with you. It's almost the same thing where 'Now that you're offended and I have your attention, let's talk about this'. I'm pretty sure the cover of this new Jonah33 EP is going to raise some eyebrows. Back in the early '20s, when you were arrested you had this chain with a pallet around your neck and it had your information on it. A buddy of mine, we found this picture of Jesus and he's bloodied up, he's got the crown of thorns on and he's got one of those arrest pallets around him. Jesus was a criminal, that's why he was killed. It's going to turn a lot of eyes, but it's going to open a lot of conversations too, so I'm excited about it."

Nice article. Anything he writes or produces is worth a listen. Great guy. Loved Jonah33.