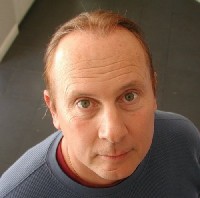 Usually when artists release their debut Christian music CD they are teenagers with at least one eye on Nashville or Eastbourne. In the case of California-based Vini Contreas, whose 'Kingdom Of Conscience' album has been critically acclaimed even picking up a British Christian music award, such a case history could hardly be more untrue. Vini is no spring chicken. The veteran singer/songwriter has a wealth of music experience, recording demos with the lead singer of rock superstars Boston and playing literally thousands of gigs in clubs, bars and coffee shops before, at the age of 40, turning his life over to Christ. In a chat with broadcaster journalist Mike Rimmer, Vini filled in some of the details of his fascinating life.

Vini remembered how he first got the music bug. "My Dad bought me my first guitar for my 12th birthday and I was immediately obsessed. The Beatles had just landed and I couldn't put it down. I wrote my first song at 19 and since then I've pretty much had one going at all times. I've been doing demos since the early '70s. I cut a local record in '76 in Maine."

Vini had gone to school in Boston with Bradley Delp, who by 1974 had become lead singer of an AOR band who were to sell literally millions of albums, Boston. Delp remembered his one time school friend and brought Vini to New York to record demos and look for the record deal. Said Vini, "For a time I stayed at his house. Brad sang all the back ups on my demos, which would be collector's items today because nobody's ever heard them! They didn't bite and that was it, you know. You present yourself and if the record companies bite, they do and if they don't, it's on with your whole life."

Vini made a living doing a solo lounge/bar act through the '70s in New England and eastern Canada until in his early 30s he played in a few original bands on the Boston scene, recording demos in the process. Vini relocated to California in 1990 to pursue a songwriting career. But then, to his great surprise, he became a Christian. He recounted, "I was playing and people were saying to me in clubs, 'Do you go to church?' I said no. I was prompted to read the Bible. I thought that I was going to be 40 and maybe I should read the Bible. So I started reading the Gospels and realised by the time I got into Luke that it was the same story four times. I never knew that. There was a brother of a friend of mine from back home who lived in Redondo Beach and he was going to Hal Lyndsay's church. We became friends just because I knew his brother. I called him up one day and he asked me if I wanted to go to church. I said, 'Yeah, I think I'm interested.' We were going golfing one day and my friend was talking about the rapture and I was going 'What the heck is the rapture?' So my interest was sparked. One Sunday Hal held up the Bible and said, 'There is nothing in this that isn't the truth.' That kind of sunk in and I think it was shortly after that I was watching Jan Crouch on Trinity Broadcasting Network and she was in a crying jag with makeup streaming down her face. I ended up hitting the rug myself and just accepted Christ there."

Vini pursued the Lord and started writing and playing worship as well as penning and singing contemporary Christian songs. He said, "I've had the joy of leading worship at three different churches in Southern California and, for a couple of years, at Youth Camps. I've put my efforts for the past two years into my CD 'Kingdom Of Conscience.'

One of the outstanding songs on the album is "The Invitation". "It's straight out of Isaiah, chapter 55 from top to bottom. One of my favourite chapters. [It says,] 'Everyone who thirsts come to the water and those who have no money come buy and eat. Come buy wine and milk without money, without price.' It's God inviting, through Isaiah, humanity to come and be in his Kingdom. There's some great verses in it you know. Just brilliant." Another standout is the track "Embrace The Light". Commented Vini, "I used to play in the '90s before my second child was born. I was playing youth camps and at the end of a Saturday night they always had an afterglow and there is an invitation for the kids to give their life to Christ. I wrote this song for the kids that were not quite sure they wanted to come forward."

I have gotten the opportunity to meet Vini. I have been attending Living Hope Church, where he attends. He is a wonderful, powerful voice, in singing, and in speaking. He just played at my wedding on December 21st 2011, with our violinist at church Joanna, they both played beautiful together, and it made my special day. Vini's music inspires my life everyday listening to his cd's I was given. I pray that whatever Vini decides to do next, that God will give him every aspect he needs to inspire everyone else out there, through his music they can find the lord. I know he has given me the inspiration to get back to singing praises to the Lord, and knowing my voice is heard. I look forward to his singing in church when he can, and God Bless him on his journeys whenever they lead him.

Vini has that special passion and feel that the first blues pioneers had, he's quite mesmerising with just an acoustic guitar and a voice.