Mike Rimmer talks to Don and Lori Chaffer of WATERDEEP 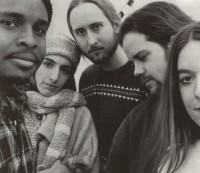 Mike: Why record a worship album?

Don: I think as we've continued to wrestle through the issues of calling we're pretty firmly convinced that God calls people in two directions all the time. That every gifting has a manifestation for the Church and for the world, so this is just an expression of our gifting towards the Church and our desire to give to the body. A lot of the songs were born out of spontaneous worship times that happen in our concerts. We took some of these choruses and filled in the blanks. It was also an opportunity to refocus on that. Worship is an important thing to have as an element in everyone's life and it was a good chance to remember that.

Mike: Won't people say that you're just jumping on the worship bandwaggon?

Lori: I'm sure they already have.

Don: Yeah, they probably will but we led worship in an independent non-denominational church for five and a half years. We also led worship in an Episcopalian church for a while. So worship has been a big part of our church experiences. Then when we went out on the road, we ended up falling into this routine of doing our songs and performances. Then towards the latter portion of the evening, we would head into a great deal of spontaneous worship and it was highly interactive. It always has been. On the one hand I don't want to defend it too much because I just think "Whatever." As crazes or fads go though, worship is an awful good one. I don't have a whole lot of bad things to say about that. Some people are critical of the idea of people making worship albums for money and certainly that's not a good idea. However, Paul said, "Praise God that Christ is preached none the less." To some degree, praise God that he is being praised none the less.

Mike: On the new album you duet with Fernando Ortega, isn't that an unlikely alliance?

Lori: We saw him like three or four times last year and every time we ran into him we'd just start talking. It was really natural. We just clicked.

Don: A lot of our musical partnerships are based more on personal relationships rather than musical relationships. I think Fernando's newer record though bears the signs more of a lot of that impassioned, melancholy, singer/songwriter thing, which is something that we definitely are in touch with.

Mike: You have always been a band that have explored the spontaneous and some of the songs on the new album have long spontaneous parts to them don't they?

Lori: I had a revelation the other night as we were worshipping with a group of people. Too often, I try to cater my worship to what I think other people will get into. To make it accessible and I realised that's why I hadn't been able to get into worship for so long because I'd been in a dry spot with that. The other night I'd had the thought, "What if I just let myself worship the way I would if I was home alone?" It may bother other people because it might seem like I'm trying too hard or showing off. So I think that's part of what goes toward being into the whole spontaneous portion of worship. It's letting yourself.almost making yourself choose to be free. Sometimes you have to just take that first step. It's like anything with faith, you have to start to have faith and then God carries you along.

Don: Bob Dylan said he wrote songs because there weren't songs around that said what he felt and I think the whole spontaneous thing is like that. Even having written worship songs and having a large body of worship to draw from, there's still moments and corners of the human experiences that are not touched. That's why God continues to have things to speak to people and that's part of the spontaneous thing as well.

Mike: Isn't the danger now is that you could be known just as a worship band?

Don: Actually, we had plans there for a while to put in the record sleeves, "Hey! We're not a worship band!"

For more on Waterdeep visit the Waterdeep artist profile