We Are Leo: Chicago's pop rock team offering 'The Rush & The Roar' 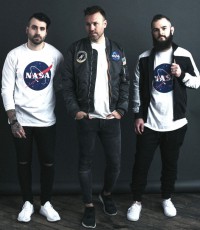 The latest album by Chicago's We Are Leo has definitely returned them to the US Christian radio fast track and more than one reviewer has praised the synth-driven, pop rock dance-tinged sounds of 'The Rush & The Roar'. Timothy Yap summed it up colourfully: "We Are Leo (WAL) didn't check their brains at the door when making this new record. While many of their peers are easily satisfied with banal lyrics of recycled clichÃ©s and the superficial two-dimensional tropes, this is not so with WAL's 'The Rush & The Roar'. Thoughtfully creative and viscerally moving, We Are Leo doesn't just dwell on the trite. Rather, creating well-developed word pictures poetically unfolding along well-crafted melodic lines, the songs will leave you on the edge of your seats."

The band's history goes back to 2011 when David Duffield (lead vocals, keys), Doug Weier (guitars) and Josh Sentner (drums) met at a local school of worship. Remembered David, "It was like a training school that's based out of the church we go to. We go to a really cool church, the same church as Skillet. We all met at the school of worship on a nine month discipleship program. It also taught us songwriting, singing and keyboard playing. We met there and started the band, we started working in Starbucks, making music in our spare time in the garage. We grew from where we were just making really rough demos to having the chance to open for Skillet and get connected to different Christian tours."

The band had their first release, the EP 'Hello', in 2011 and a remix of it in 2012, imaginatively titled 'Hello Again'. Duffield said, "Yeah, 'Hello Again' is actually a remix, it's the same record. Clever, right? We were just making some music in our garage, super rough, trying to kind of figure out how to make music on computers, watching YouTube videos and stuff like that - in the early days, about six, maybe seven years ago. So then I was working with Ben from Skillet. I was over at their studio and I was hearing the mixing they were doing and it was really good - these guys were like killer good at mixing - so I actually sent some of my tracks over for them to mix and they heard the tracks and they were like 'hey these are really good and we really like what you're doing so we wanna sign you to make an actual studio record'. So Ben and Joe, two guys from our church, paid for the whole record. They made it and produced it and helped us get started on that. It was our first record and it was a cool experience to be able to make a record with those guys."

David explained why the band settled on the name We Are Leo (Leo meaning lion in Latin). "I think I've been so challenged by the talk in the Bible about how the righteous are supposed to be bold and courageous, like what was told to Joshua - 'be strong and courageous' - and different parts where it says the righteous are as bold as a lion. And then it talks about Jesus in that way, like it says God is strong and he's a king and he's a conqueror and all these things of the strength of God. Definitely in my life, it hasn't always reflected that same courage 'cause I think there's so much that we can worry about and there's so much anxiety. Our world is just obsessed with everything that could possibly go wrong. The what-ifs about the future, what if this? What if that? But in the midst of that we see the teachings of Jesus and about God and about calling on us to be ok, don't worry, be strong, be courageous. That's what I aspire to and what I believe I'm changing into, someone who's gonna stand strong and be courageous and when a hard situation comes up I wanna be like Jesus, I wanna be strong and not worry and be courageous. I'm not there yet but I'm en route, I'm definitely closer than I was 10 years ago, a lot closer. So it's about my desire to be like Christ and to be lion-hearted. The reason why we put we is because for us, this is not just about us or being a rock band, we wanna be part of people's lives, we wanna be part of our friends' lives and we wanna be making music that's encouraging people to believe they can be strong too. So instead of popping in some random music, they can pop in something that's gonna have that same heart of 'this is how I wanna be'." 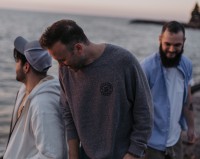 By 2014 WAL had signed to Dream Records. It was their 'Fightback Soundtrack' set which helped We Are Leo to really take off. Said Duffield, "Because of 'Fightback' we got connected with Dude Perfect and because of Dude Perfect and their videos we've got over two million views on YouTube which is crazy because that got us on playlists. Our song 'Epic' is about to hit two million on Spotify. It's kinda crazy because if you look at our Spotify numbers, like where we were comparatively to other bands before 'Fightback', when we [connected with] Dude Perfect all of a sudden we're doubling and tripling up on the monthly listeners. A lot of other Christian bands that were kind of in our same zone or whatever, we really took a huge jump and a lot of it was thanks to Dude Perfect. I think the other thing about 'Fightback', it was definitely a learning experience because that was the first one where we realised we could self-produce. That was a really important realisation for us. That happened for us on 'Fightback' and I think that really changed the course of our band because it gave us a tonne of confidence."

On 'The Rush & The Roar' one of the subjects tackled depression. Explained David, "When I was 17 I was dealing with a time of anxiety and depression. Being an artist I'm definitely prone to that sort of thing and I think for me it usually comes back to the fact that I feel like I'm never good enough. I try to do things and I just feel like I have to be better, I have to be more awesome and I have to try harder and If I'm honest about the way I'm feeling and for me as a teenager that was super hard to deal with. I had no idea what to do with that and I'd try to be good at sports and I'd try to be good in school and try to date the right person. But there's so much pain because if I were to ask the question am I enough? Am I good enough? I just felt like the answer was no. In that I got into a super low place, dealing with addiction, dealing with depression and dealing with suicidal thoughts. That's really how I came to Christ because I reached out.

"I remember I was at a party and I was just in this whole scene, I was like this is not a good path for me to be on and I kinda walked out of that scene. I remember praying, 'God if you're real will you rescue my life' and I started to feel this peace come in. I'd been to church and stuff like that. But this was like a me and God moment, standing outside asking 'God are you there?' like REALLY praying, you know? The Lord started to meet me from there. Since then I really have lived for God. I still deal with depression and there's still been a lot of fights with things, but in the midst he's been meeting me. I think the beautiful thing for me is that now if I ask that question, am I enough? I feel the answer is yes and not because of what I've done but because God loves me and because he made me and because that's what he says about me. That's kinda what the song '61/Twenty Three' is about; it says my heart is slowly un-breaking, with your touch you remake me, I know it's not a process that happens over night or in a sermon or in a prayer, but slowly as time goes on God is remaking my heart and I deal with addiction so much less and when depression comes on I'm getting through it and I'm finding God in it and I'm overcoming it faster and quicker."

Over the years there have been changes in David about his whole attitude to Christian ministry. He admitted, "I used to have this unrealistic expectation of how much I should be doing and should be accomplishing and over the last year or so, I've really had to slow down and take more time to pray, take more time with family and take more time to go on hikes and walks, read books about God. I'm realising more and more there's this parable in the Bible where the kingdom of God is like a mustard seed, its super small and you plant it and it grows into this big tree. It's a metaphor of how walking with God is something that grows but it takes a really long time. It's a tiny seed and then 50 years later it's a tree. I think in my life I want things to happen right away, I wanna say a prayer and it be like BOOM and awesome things happen immediately rather than like, 'oh I'm gonna live for God and read the word and take care of my wife and be involved in small groups at church and be faithful and take time to wait on God and listen and pray and practise rest'. And 50 years later there's this thing grown, you know what I mean?

"It's been a really cool journey that I've been on 'cause after I've slowed down I've just known this closeness that I haven't felt before, so I'm really excited about that. Man, the world's such a messed up place and I'm so grateful that we have a hope in Jesus, that he's coming back one day and that he's gonna put things right. Without that faith and that hope it would be so easy to just stare at the state of the world, 'cause what do you do about the problem of pain and the question of politics? There's so much wrong. It's encouraging for me to have that faith that Jesus is coming back one day, that every tear will be wiped away and that he will make all things new and I hold onto that every single day of my life."

The opinions expressed in this article are not necessarily those held by Cross Rhythms. Any expressed views were accurate at the time of publishing but may or may not reflect the views of the individuals concerned at a later date.
About Alexander Bushe

Alexander Bushe is a student living in Stoke-on-Trent.

I really like ur music and videos and you did an amazing Job at the high School.