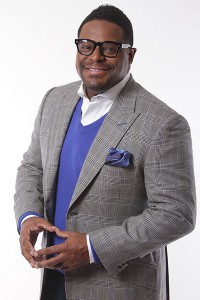 Yesterday William Murphy recorded a new live album at the church he pastors, the dReam Center of Atlanta in Decatur, Georgia. It is a follow-up to his 2006 chart-topping, Grammy-nominated 'Demonstrate'. The singing bishop, worship leader and songwriter behind such gospel hits as "Praise Is What I Do" and "Everlasting God" is excited about what will be his sixth album.

He said, "I'm calling the record 'Bridges' because that's what every one of these songs will be! A 'bridge' is a structure carrying a pathway or roadway, over a depression or an obstacle. I believe our lives will never be the same after hearing the Word that's embedded in every one of these moments that we've captured LIVE. His glory is going to settle here, and because his love never fails, it'll cause you to know him as the rock, the chainbreaker, and enjoy a bliss like you've never known!"

William Henry Murphy III was born on 2nd August 1973 in Detroit, Michigan. Both his father and grandfather were pastors/bishops. He moved to Atlanta, Georgia in 2001, with his wife Danielle and two children, to serve as the worship minister at New Birth Church. He later founded the dReam Center Church of Atlanta in 2006, where Tasha Cobbs was for several years on the pastoral staff (and in fact Kenneth and Tasha Cobbs Leonard are the producers of 'Bridges'). William's wife Danielle is also a pastor at the church.

Murphy's music career began with the release of 'All Day' in August 2005 on Epic Records. This peaked at number 22 on the Billboard Top Gospel Albums chart, his second 'The Sound' on Central South Records in 2007, peaking at number 23 on the same chart. William's third album 'We Are One' reached number 16 while his fourth 'God Chasers' made three on Billboard's Gospel Albums chart and number 90 in the mainstream album chart. It was 2016's 'Demonstrate' featuring two hit singles "Arise (You Are God)" and "Everlasting God (featuring Bishop James Morton)" which won him a Grammy nomination.

In 2014 Murphy was asked in an interview with Christopher Heron whether he was comfortable in being a pastor, worship leader and gospel singer. Murphy responded, "I am absolutely comfortable. The song I wrote a few years back says 'I was created just to give you all the glory/I was created just to worship and adore you/That is why I am here'. My mother was 15 years old when I was born. My father 17. They never married. If you look at it in a natural sense people would say I was a mishap, I was a mistake, I was whatever. But man, I am supposed to be here, and this is what I'm supposed to be doing. I'm absolutely comfortable in my skin. I love pastoring the dReam Centre Church of Atlanta. They're the greatest group of folks anywhere in the world. What God is going to do through the partners of the dReam Centre is going to be world changing. I'm excited to be part of the leadership of this group of people who are going to glorify God in the earth and not just in the church. I am comfortable with it."