A fictional story: The Apocryphal Chapter Of Genesis
Jacob fought with the angel all night long on the riverbank. As dawn was breaking, his opponent blessed him and injured his hip, then he left him. Jacob struggled across the river and reached the other side as the sun was rising across the Mesopotamian desert. He heaved himself up onto the bank, terrified, soaking wet and lame, and he said to himself, "I like doom metal and stoner rock, and I like country music and bluegrass, and I even like Marilyn Manson a bit (though I know I shouldn't), so I'm going to start a band." That's how Wovenhand was born. And the Lord listened down from Heaven and behold, he liked what he heard and he said, "It is good!"

OK. Just kidding. But that gives you an idea of the Bible-soaked, alternative, crazy and inspiring world of David Eugene Edwards (or DEE as he is credited on the CDs), current frontman of alt-country/hard rock outfit Wovenhand and previously of highly influential band 16 Horsepower. I spent several years chasing an interview with DEE. His record management warned me that he does not like interviews, but when he does agree to grant one, it can be particularly "interesting". So in autumn 2016, when I finally sat down with DEE in the dressing room of a mid-sized venue in Grenoble, France, I was prepared for anything. I was not disappointed. And by the way, before we started the interview, he had no idea I was a Christian! Read on!

Jonathan: Thanks for accepting this interview. It's a privilege for me. Let's start by talking about the latest album, 'Star Treatment'. How has it been received?

David: It's done better than the last one. Better than 'Refractory' so far, I think. But beyond that, which is not very much, I don't know.

Jonathan: Is there one track you really like more than the others?

David: Well, I like the love song "Golden Blossom". This is my favourite song because it's a real love song. It's a serious love song.

Jonathan: Am I going too far if I ask who you're speaking to? Who is the song addressed to?

David: Well, it's speaking to the love in my own life. But of course, this is a reflection of the greater love between the Bride and the Groom. Myself being the bride. It gives a deeper understanding of the relationship between God and you. It's loosely based of course on the Song of Songs. It truly is the love song.

Jonathan: What inspires you as an artist?

David: I don't know. I let the Lord speak however he's been speaking. And he does it all kinds of ways of course. Everything is through his Son at the moment, so it's just being shown who he is. You know, this is eternal life - to continue to know who he is. And he's the Son. So I'm just doing that.

Jonathan: I can't think of many songwriters who fit so many biblical references into their lyrics. Even Bob Dylan doesn't do that. Even praise and worship songs often aren't as full of Bible references as your songs.

David: A lot of those other people, they know how to write songs. They are more adept at using words and coming up with a story to reflect something else. I don't have this gift. I'll just quote Scripture and sing it so that I'm communicating with it. Scripture is communicating itself. It's not just a book, it's the Spirit speaking. The Scriptures are the Word of God. Period. The whole meaning of his Word is mercy. That's the point of the Word. That's why it is so important. I mean, he's not showing it because he is God. He is showing it because he loves you. He is merciful. 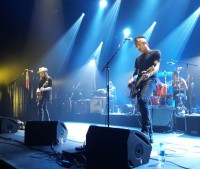 Jonathan: How have you come to know the Bible so well? Do you read it every day?

David: I don't. When I was growing up, I was not a good retainer of the Scriptures. We had meetings in church, on a Wednesday night. It was the church version of the Boy Scouts. You got badges if you memorized verses. So the knowledge of God became a competition. The knowledge of God and the favour of God was our competition. This is what was taught. It's all this religious stuff going on. But anyway, fortunately, the Lord works. He shows you who he is in spite of how He's been presented to you. "In spite" is not a good word, because he's not spiteful, but he "usurps" everything on your behalf. Not out of spite, but out of mercy and love. He does this with any human being. Because there is no religion that is real. You understand that, don't you? There is just God and he's there. Man has made religion, but God came to meet man, in religion, because that's where man has chosen to know God. He doesn't know God outside of his own image. But God is not like us, he doesn't behave like us and he doesn't judge like us. He is merciful. We are not merciful.

Jonathan: Your biblical in imagery is huge. In the song "Crystal Palace" you sing, "He rewards with perfect peace, swiftly, fiercely." Or in "Swaying Reed": "Out of Egypt I have called my son." How do you get that imagery? Do you go to the Bible and say to yourself, "I need something to write a song with" ?

This is fantastic, thanks. Just came across the interview as I've seen he is coming to the UK in November.

Where should I go, yes but to the Lord. I'm on the same page. The only thing I would like to ask David: how do you cope with judgement: I've been to you house, and seen what you adore?

Hi Jonathan,
Thanks for this interview, especially for the spiritual questions about DEE's Christianity!

For more on Wovenhand visit the Wovenhand artist profile