Jonathan: Your album 'Consider The Birds' opens with "Sparrow Falls". That song uses gentle words of Jesus. But then, it slams listeners against the wall with the lyrics "Holy King cause my skin to crawl/Away from every evil thing" and then talks about a cottonmouth snake. Some of your biblical or spiritual lyrics are far from gentle, meek and mild. Almost violent. Certainly unsettling. Is this a conscious thing on your part?

David: It's just what comes out of me. Yes of course, it's conscious. Unconscious too. It's both. I am in need of the eternal intercession of my Saviour. And this is a touchy subject. This is where people start drawing lines. And want to see evidences in your life, rather than the glory of the truth. They don't trust the truth. They're afraid that somebody's gonna get away with something. Whether it be their behaviour that they get away with, or the way they think about God. Either way, that's not how God works. God is completely loving and merciful, and it's ruthless. The mercy of God is absolutely ruthless, beyond the wildest imagination and beyond the evil of men.

Jonathan: You are a Christian. Yet you are very different from the traditional view of what Christians should be, how they should think and talk. Have you ever been challenged on that? What do you answer people who challenge you?

David: For the most part I just ignore them. I had a strange upbringing. Real strict early on in life, in a super holiness church. It never meant anything to me. I never felt holy or anything like that. But I knew I was saved. I was saved when I was five years old. And I've never had a doubt since then. It stays with me now. It's all dealt with by the Son. One day, the sun was coming through the window. I was in a basement, and up there at the top the sun was coming through the window. It was morning and the sun was just coming up. And the Lord showed me who he was. I went to normal church. We went from the Nazarene church to the Baptist church. And from the Baptist church to different non-denominational churches. And still now, I do go to church sometimes. But I'm just never home enough to go consistently. Ever since I wasn't able to memorize those Bible verses, I've been on the outside of what the inner side of the church looks like.

Jonathan: I have spoken with many artists who consider themselves as people of the Christian faith. A lot of them struggle to find the balance between creating art and expressing their faith. You don't seem to have that problem. Can you tell me why?

David: I think the arts are dark. This is all Tubal Cain. They've gone the way of Cain and Qora. It's an attitude. It is what the world is based on. It is what society is based on. And this is what we've been called out of. When a Christian looks in the Scriptures, and it talks about the world, what is the world? The world of the flesh and the devil. I guess they'd say that the world is the system. And that's true, it is the system. It's what we live in. The arts are just a part of this. They are not something separate and holy. But the Lord has usurped art and music and literature, and everything else, on our behalf, because of who he is. It's endless, the usurpation of the Lord. And that is the glory of the Lord. The ever revealed glory of the Lord is his humility and subjection to what we make him out to be. 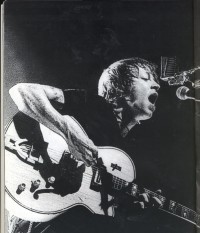 Jonathan: Two years ago you played Hellfest, a metal festival in western France. I have been going there as a Christian journalist and pastor since 2010. Why do you think there are so many links between heavy music and religion, between the music and God and the devil?

David: Well, music and religion are based on the same thing. It's an art form. Religion is another art form. Art, like heavy music, is based on war, which is also what religion does. It is a struggle about death, but in order to preserve life because you're under threat or whatever the situation might be.

Jonathan: And you feel that's reflected in the music?

David: That's what rock 'n' roll is. There is no sacred music, okay? If I walk into a church in America full of crackers all singing joyful and swaying, I'm not impressed. It doesn't mean anything to me. It doesn't mean it's sacred music just because it's got this attitude. Of course, with the lyrics, yes, it's speaking about certain things. But even if it's speaking about certain things, it's rare for me to agree with any song. But that doesn't mean they're bad songs. I've written some songs that I don't agree with!

Jonathan: One of the questions I always ask is, is there an immaterial world? That's almost a moot point after all you've just said, but I'm interested - how do you interact with the immaterial world?

David: It is what is there. There is no escaping it. People believe that if you're a Christian, then things are gonna go well for you. And I don't understand why they believe that. I don't get that in the Scriptures. I don't see that anywhere. But that is what's promoted. All things belong to us. But what you want, that's something else. All the things down here, these are the devil's things. And the Lord is - this is my understanding of who Christ is - Christ is the gate out of Hell. He is the way. He is the Son. He is the virgin-born one. He is the shepherd king. He is the son of God. All of this is man's imagery that God has entered into. This is how he has shown himself to be who he is. And this is just because of the fallen state that we are in. That's what he has had to do. It's as simple as that. He shows himself to be other, and his world and his life is other, and it's not going to take place in this reality right here. This reality has been given to another. The gifts and the callings of God are irrevocable.

Jonathan: Do you pray?

David: The Holy Spirit prays. I have wants, and neurotic needs, and haphazard care for others. And this comes from my mind, and I think of it in terms that mean to pray about it. You know, I've been a Christian forever. But that doesn't mean anything, I'm sure other people pray the same, though they've never gone to church. I don't view my prayer as what's effective. Scripture says, "The prayers of a righteous man availeth much." In my opinion, Christ is the only righteous man. So his prayers are prayed. I tend to be thankful for his prayers on my behalf, as my prayer.

This is fantastic, thanks. Just came across the interview as I've seen he is coming to the UK in November.

Where should I go, yes but to the Lord. I'm on the same page. The only thing I would like to ask David: how do you cope with judgement: I've been to you house, and seen what you adore?

Hi Jonathan,
Thanks for this interview, especially for the spiritual questions about DEE's Christianity!

For more on Wovenhand visit the Wovenhand artist profile