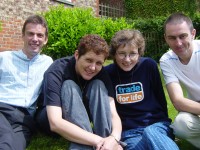 Tony: Can you make with the biography?

Kate: da capo was started in September 1999. Our church (Great Ayton Methodist Church in North Yorkshire) for many years had a worship band which was disbanding as the leader was leaving to become a minister, and Sheila Blair was asked to form a band to lead a monthly informal evening service which had been going for some time. Originally there were six of us, but one left to go to university and another had to withdraw due to pressure of work and family commitments, leaving Sheila, myself (Kate), Jamie and Peter. So we started off leading worship but before long Sheila brought along some of her own songs to try out on us and we decided to perform and record them, eventually producing the album 'The Beginning' in April 2001. We still lead worship regularly and also play concerts wherever we are invited, and launched "Somebody's Son" at a concert in November 2003 in our own village. Along the way we have raised about Â£2000 so far for various charities through fees, expenses and CD sales. We feel privileged to be able to enjoy ourselves by playing music and at the same time help people who are in desperate need.

Sheila Blair is our songwriter and sings her own songs, and does the talking at concerts. She is self-taught on the guitar and has expressed herself by writing songs since her teens. However, her early songs were purely personal and it was not until Da Capo was formed that any of them reached the ears of the public. As a student in Newcastle Sheila played regularly in the folk club circuit. If she has any time to herself she likes to spend it twiddling on her guitar. She now works as a medical secretary and has two children at secondary school.

Kate Harvie (that's me!) sings backing vocals to Sheila's songs and shares the lead vocals on other people's songs. She tends to do the talking when we lead worship. She is classically trained and plays violin and viola, and will also shake a shaker if necessary! She also plays in an amateur symphony orchestra. Kate's musical background also includes a lot of Scottish traditional folk music as although she is Yorkshire born and bred, her mum originates from the Hebrides. Kate works part time as a GP and is married to Jamie; they have three children aged between four and 11.

Jamie Harvie originates from rural Aberdeenshire and plays bass and percussion. He also looks after the technical side of things and has engineered our recordings. His favourites are the hand drums - djembe, bongos, congas. Jamie works as an Industrial Chemist.

Peter Mitchinson is a lifelong Middlesbrough supporter and plays drums and percussion. If the Boro is playing while we are rehearsing we get the score on his mobile! He is a perfect gentleman and never seems ruffled by anything! He works for a heavy engineering company and travels a lot, and is married with three children aged between 10 and 2.

Tony: Your style seems very folk orientated. Do Da Capo play folk festivals and folk clubs and does anybody sing with their finger in their ear?

Kate: We have played in several folk clubs in the local area including at Stokesley, Guisborough and Darlington. Our intention is to introduce a subtle Christian message but we have also found the folk club audiences very appreciative and friendly. We have also had a bash at open mic nights at an R'n'B club! I'm sorry to disappoint but none of us sings with a finger in our ear - we haven't any fingers going spare anyway! I haven't noticed any fingers in audience ears either!

Tony: Your song "Somebody's Son" is quite a challenge against judgmentalism. What's the story behind the song?

Kate: (Sheila Blair) "Somebody's Son" was written due to frustration, disappointment and disbelief at the way some people who consider themselves superior to others due to worldly position, behave towards those they consider subordinate. It was whilst working in certain employment, which is historically hierarchical, that I encountered this and felt moved to express my feelings. Those who were being treated badly, as if they were second rate citizens, were fellow human beings with parents, partners, children, friends who loved them dearly and I wondered how they would feel at their loved ones being demeaned. Everyone is loved, even if alone in the world, even if outcast from our society, by our heavenly father who loves us with a greater love than we can ever feel or express and it must hurt him to witness this. He even loves the perpetrators. Jesus was outcast, was God himself and as he says, "What you do to others you do to me." He was "Somebody's Son."