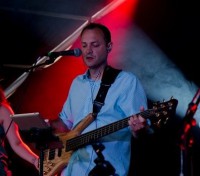 THE WORSHIP leader and songwriter Ross Lander, who leads a large worship team of around 40 at Huddersfield's Elim Pentecostal Church, has released his debut album, 'Masterpiece'. Wrote Lander, "I have played in worship teams for 30 years on bass, keyboard, drums, flute and vocals, and have been in a number of performing bands as a bassist (including touring the UK and US with the Paul Poulton Project), as well as some national and regional Christian conferences and events. I have been writing worship songs for some time, some of which have been popular at our own church, but until now I have not attempted to record them properly. It may be a little unusual that although the album is in my name, this is far from being a solo album. The songs are all mine, with the exception of a reworking of a classic hymn, but in order to bring out the best in the songs I have brought in a number of talented singers and musicians to ensure that the songs are showcased to their potential."