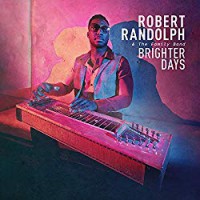 THE RENOWNED exponents of "sacred steel music", Robert Randolph & The Family Band will be releasing on 31st May on vinyl, CD and digital their latest album 'Brighter Days'. Read a press release, "When it was time to record 'Brighter Days', after releasing the Grammy-nominated album 'Got Soul', Robert chose to work with producer Dave Cobb. Cobb is best known for his work with new country stars like Chris Stapleton, Sturgill Simpson, Brandi Carlile and Jason Isbell. 'Brighter Days' is a full dive back to Randolph's gospel roots, effortlessly mixing it up with blues, soul, funk and the unmistaken sound of the pedal steel guitar. Robert Randolph makes the instrument weep, wail, scream and holler!"