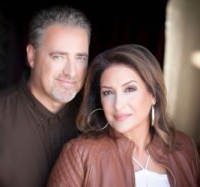 POPULAR country music duo Jed & Claire Seneca, who released an album under the name Seneca in 1994, are issuing on 26th October the project 'Carry You Through' through Frethouse Records. The album includes contributions from many of Nashville's most renowned studio musicians, including Buddy Hyatt, piano (Toto); Grammy Award-winner Brent Mason, electric guitar; Bobby Terry, acoustic guitar (Alan Jackson, Willie Nelson); ACM-winner Lonnie Wilson, drums (Carrie Underwood, Tim McGraw); Steve Hinson, pedal steel (Kenny Chesney, Dolly Parton); and Kevin Grantt, bass (Garth Brooks, Johnny Cash). Said Jed, "This new album captures the journey the Lord has taken us, from Nashville's Music Row, to church planting across the country, and finally to the coast of California where we rediscovered our love of music and the impact it can have on people's lives. These songs are our lives, our hearts, and we are finally ready to share them with the world."