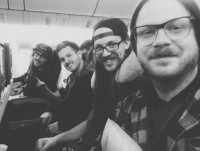 SOLID STATE Records have released a seven-song mini-album by California's hard music band Phinehas. Read a review on the Alternative Press website, "Phinehas' new concept record 'Dark Flag' contemplates the horrendous assaults on human rights that reportedly occur in North Korea under the Kim regime. While the band do not take a political stance, the record focuses on the pain of human liberties being stripped away and the frustration that no one is taking responsibility. As a result, 'Dark Flag' contains some of the most heartfelt and moving lyrics of the band's career."

For more on Phinehas visit the Phinehas artist profile