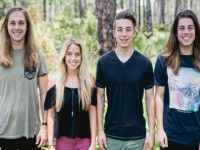 THE CCM group Bonray, whose "Turn My Eyes" from their six-song debut EP of the same name reached the Top 10 on America's Hot AC Radio Chart, have landed a song "Good Life" in the trailer for Season 3 of the popular Netflix TV series Good Life. The track was also heard on ABC TV's show 2016/2017 Imaginary Mary.