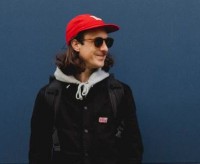 FOR THE first time in four years, popular singer, songwriter and pianist Luke Leighfield is releasing a new song. "Give It Up" is issued independently and is being released under a new name, Try, Try, Try. Last year, Leighfield co-wrote a musical about startups, Noser: The Startup Musical. Last year it did a sold-out run at Camden Fringe and this year is to be performed at the renowned Edinburgh Fringe.