Another single for Gawvi prior to his second full-length album 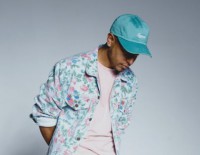 AWARD WINNING producer, DJ and solo artist Gawvi has released a track, "Get 'Em", featuring Aklesso, Rhomar Jessy and TROSSTHEGIANT. It is the fourth single released by Reach Records this year, which will appear on Gawvi's second album, 'Panorama', to be issued worldwide on 19th October. Said Gawvi, "'Get 'Em' is that song that comes on at the show and you can't help but want to mosh and go crazy with the crowd. 'Get Em' is also a call to action for our generation to stand up for the things they believe in. I want people to hear the urgency in this song and know that we can't keep sitting on the sidelines watching people live out hopeless lives when we, as believers, have the answer. We have to go 'Get 'Em'!"