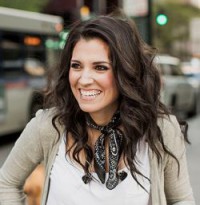 WELL-KNOWN singer, songwriter and worship leader Nicole Serrano, one of the lead singers of Red Rocks Worship and who has worked with such acts as Chris Tomlin, has released a three-song EP. 'If I'm Honest' features the songs "Broken & Open" and "Over My Head", previously released as singles.