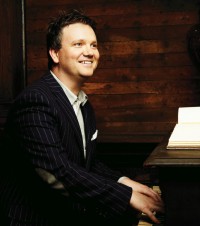 ON 16th June hymnwriter Keith Getty was awarded an OBE by the Queen. he award, honouring Getty's contribution to music and hymnwriting through his re-popularising of hymns, marks the first occasion on which the award has been given to an individual who is actively involved in the world of contemporary church music. Beyond just their work as hymnwriters, Keith Getty and his wife Kristyn have spent the last decade as ambassadors of the genre. Getty's hymns, often written in collaboration with Stuart Townend, includes "In Christ Alone" which has been the number one most-frequently-sung in UK churches for a record-setting nine consecutive years. Said Getty, "When I first received the call, I was pretty surprised. It is an honour for us as a family and also for the great hymnwriting heritage we have here in the UK of which we are a tiny part. I am very grateful to her Majesty the Queen for this honour."

Later this year, Keith and Kristyn Getty's first book, Sing! How Worship Transforms Your Life, Family And Church, will be published internationally by B&H (Lifeway). The book release signals the commencement of the larger Sing! project, launching with a private event in September for Houses of Parliament and immediately followed by a conference in Nashville, where 4,000 will attend and a 5,000-person hymn-sing at the Grand Ole Opry House.