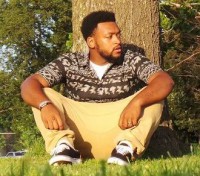 THE RAPPER from Tulsa, Oklahoma, Jarry Manna, has released a seven-song mini-album. 'Legends Of Lotus Waver' is released through Indie Tribe.