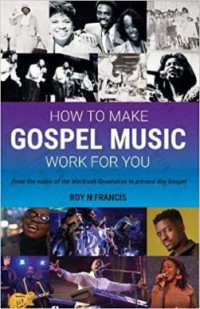 ONE OF the important behind-the-scenes figures in British gospel music, Roy Francis, has written a book, How To Make Gospel Music Work For You, to be published on 26th June. In the past, Francis was a member of one of Britain's first gospel groups, The Soul Seekers. Later, he was producer on the Channel 4 series, People Get Ready, which showcased UK gospel music and worked as a producer for BBC's Songs Of Praise. About his book Francis said, "It's my hope that Making Gospel Music Work For You enlightens readers on the origins of the music described as UK gospel and that it lets UK gospel artists know it is possible to achieve success with the music that they love."