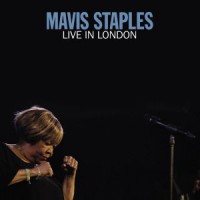 THE 79-YEAR-OLD gospel diva and Rock And Roll Hall Of Fame member Mavis Staples will release a new album, 'Live In London', on Anti Records on 1st March. It was recorded at London's Union Chapel and produced by Mavis herself. Said the singer, "I've stretched out - I'm singing songs that rock stars have written for me, but they know me and the kind of songs I want to sing." She points to the opening song on 'Live In London', "Love And Trust" composed by Ben Harper. "I love that song, it's a beauty. I've been sending a message of love and trust since the '60s and I'm still searching for that."