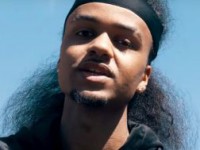 BRITISH rapper Gtay has released an EP, 'Music Warfare'. Reported Kingdom Culture YouTube channel, "Gtay is a London native, Manchester-based artist who is both a battle rapper and a recording artist. This is exciting as not many battle emcees are stereotypically able to make music for commercial consumption. Gtay seems to be able to do this with a blend of lyrical rap verses and dibs of singing as he displays on the lead single 'Blessings' from the 'Music Warfare' EP."