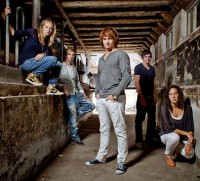 THE DANCE orientated worship band from the Netherlands, InSalvation, who have become one of the most popular modern worship acts in their homeland and toured all over Europe, have released their third album 'Neon' through Ecovata Records. One time member of The Tribe, Jorge Mhondera is a co-writer and guest on the project. A single "Vul Dit Huis Met Uw Glorie" has also been recently released.